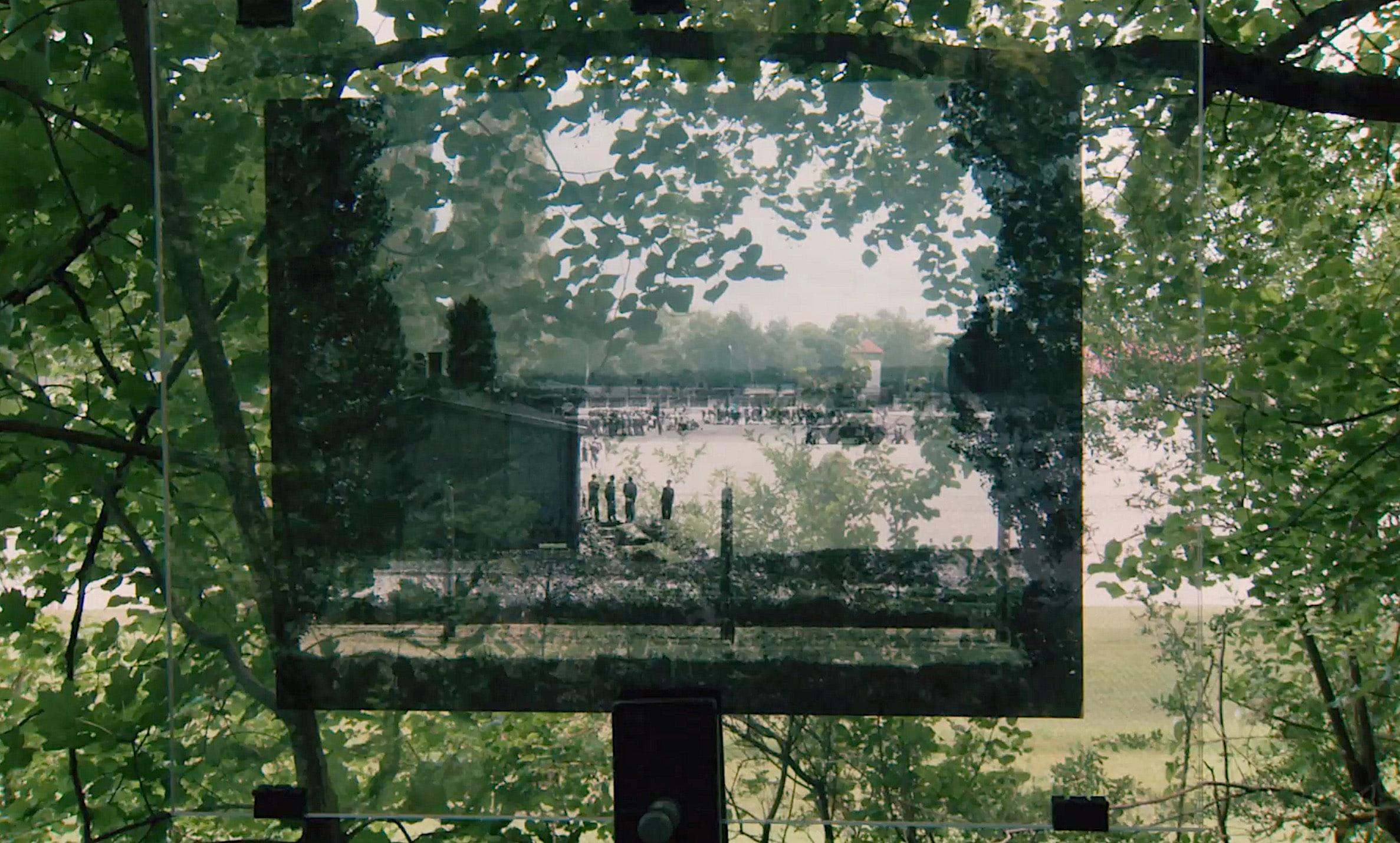 From Where They Stood | À Pas Aveugles (2021) Berlinale Forum

In his groundbreaking new documentary French director/writer Christophe Cognet shines a light on photographs taken by inmates incarcerated in the Nazi camps of Dachau, Buchenwald, Mittelbau Dora, Ravensbrück and Auschwitz Birkenau. This creative act of resistance is another testament to the horror of the Holocaust.

The film’s French title From Where they Stood is best translated as “Shot Blindly”: Photographers had to work quickly – and undercover – as detection would have meant certain death. Newspapers or odd items of clothing came in handy for their covert reportage of their experiences – a sort of photographic message in a bottle – showing what they all went through during those tragic years.

Cognet unearthed the treasure trove, carefully locating and enlarging the images, before mounting them, framed, on a mini-dolly, so they could be matched with the help of trees to the exact positions in each camp.

Dachau survivor Rudolf Cisar made an album of 50 photos, today housed in the National Archives of Prague. During his time in Dachau Cisar led the resistance group ‘Ruda’ and shot his images of the camp’s sordid SS Museum, providing a day-to-day glimpse of life in the camps. The photos of the overcrowded infirmary, packed with typhoid sufferers, are particularly moving. Cisar also photographed the empty camp during Sundays, a day off, when most inmates stayed in their barracks, with only a few venturing out to talk to friends.

In Dachau Cisar chronicled executions, well aware that he could easily join the victims should he be caught. Jean Brichaux snapped French prisoners arriving and being put into barracks, they were joined by the Spanish writer Jorge Semprun, who had fled his country for France. Georges Angéli’s photos of the Brothel and the Cinema are particularly cruel when you consider that women from Ravensbrück camp were forced here into prostitution, having arrived in cattle trucks. The Germans used the cinema as a torture chamber, a macabre memory of their soullessness.

In Mittelbau Dora camp, Czech prisoner Wenzel Polack recorded the underground factory where inmates where forced to work day and night. His images serve as a courageous act of resistance that saw the inmates take back control of what really happened, even if doing so could have cost them their lives.

In Ravensbrück, Polish inmate Joanna Szydlowska recorded the terrible injuries she, and two of her friends suffered during medical experiments in the “hospital”. Dressed up in the best clothes possible, she bravely tries to smile while showing the long gash in her leg. Szydlowska later gave the photo to the French inmate Anise Postel-Vinay, who stood a better chance of surviving. In the end, both women survived, with Postel-Vinay taking the photos to Paris in 1945.These women were known as “rabbits” – the German word for Guinea Pig is “Versuchskaninchen” (Test Rabbit). The women were injected with gas to provoke gangrene, they were then re-injected with the bacilli, before the wound was sewn up. Prisoners’ limbs were repeatedly broken, severed muscles slashed, the results of these experiments would all be recorded.

Alberto Errera, a Greek-Jewish officer and camp resistance member, took part in the preparations for the Sonderkommando Uprising of 1944 – the same year he was murdered – his photos featured the interior of Crematorium 5 from inside the Gas Chambers, through the very same opening used by the SS to drop deadly gas capsules into the void where inmates would be sealed. The Sonderkommando (featured in Son of Saul) was a special unit of Jewish prisoners, whose task it was to clear the gas chambers, stack up the corpses and take them to the Crematorium to be burned (Sonderkommando members were always executed after a certain time limit by the SS, as not to have any witnesses). Whilst Errera was taking the photos, prisoners watched his back.

From Where They Stood avoids sensationalism at all costs, the filmmaker and his team treat the subject matter with the utmost respect and dignity, echoing Claude Lanzmann’s Shoah: Cognet lets the images tell the story, the trial-and-error attempts of the film team to pinpoint the locations adding a sense of tension to the ensemble as viewer is transformed into a first-hand witness. Another utterly compelling tribute to man’s will to survive and tell the real story. AS