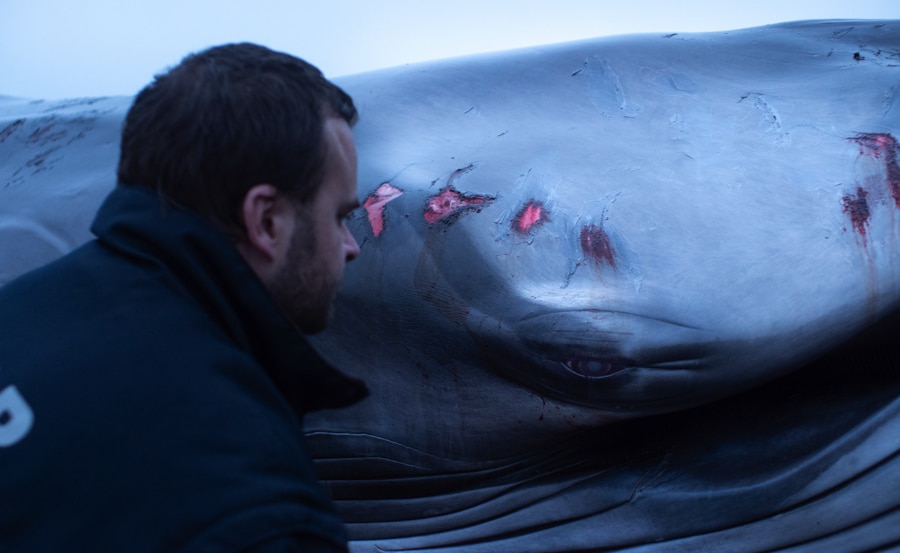 Weather conditions are becoming much more extreme. Marine animals are needing emergency care due to injuries caused by the effects of climate change on tides and changing oceanography.

The caring efforts of marine conservationists are at the heart of this cinematic nature doc From the Wild Sea from Danish documentarian Robin Petré known for her unconventional short nature films (Pulse, Stream and Distant Water) that push the borders beyond the norm. Along similar lines to Leviathan and Bird Island (2019) this deeply sensory film shows how vets in coastal regions are building up a strong support system of rescue centres to rehabilitate mammals and sea birds.

The sheer power of an image is all that’s needed to convey the tragedy of our changing climate which has given rise to powerful storms raging into Europe from the Atlantic, bringing with them injured and confused animals such as seals, dolphins, whales and seabirds. The film is swift to point out that untrained human interference in nature – however well-intentioned – is not helpful. Moving injured animals that have been washed up on the shore should be avoided at all costs. The changing tides have had a deleterious effect on seal mammals who rely on echolocation to get their bearings and forage of food: One such seal recently lost its sense of direction and headed to Morocco, wildly off course. After rehabilitation in Cornwall it made its way back north, then took a wrong turn at the Continental Shelf and headed South again only to be re-homed in the Cornish sanctuary. The release of these healthy seals back into the wild is the film’s highpoint.

Although the work being done in animal rehabilitation is an admirable labour of love, this is a really upsetting film to watch: we see seals in great distress – some of them uttering almost human cries as they struggle to breathe, their airways caught up with plastic or infection as the trained staff work to help them recover. We watch another seal gradually losing its fight for life, flippers twitching as it cries out in pain, its mottled fur coat is a thing of exquisite beauty, its soulful eyes speak volumes of the tragic marine odyssey that has led to its death.

Many animals are suffering the effects of starvation. One seal enjoys a basinful of fish, while another waits patiently for attention by the side of a ceramic bath. It’s extraordinary to imagine that an animal that spends most of its time under the sea can demonstrate so much awareness of a human setting on dry land. But it’s also worth bearing in mind that thousands of years ago we too came from out of the sea.

Whales fare particularly badly: we watch as a 19-metre-long whale lies beached like a massive, punctured tyre, off the coast of Cornwall. The team rushes to help but it’s already too late. The animal will not just die from its bleeding injuries but because its sheer weight will crush the organs, unless the tide favours transport back into the sea. Many whales die due to head-butting from a boat, or multiple injuries from propellers. An autopsy takes place on the beach itself, it must be one of the few times the pathologist actually gets inside a body to do his work. We also witness a fascinating autopsy of a small 4-5 year-old dolphin who has been terribly badly scarred by marine craft and survived and healed, before finally dying of other injuries.

Birds are particularly difficult to handle, and a white swan hisses savagely when it is given a bubble bath to wash off black marine diesel in the clinic, and here the camera offers intense close-ups of the meticulous cleaning process, including a blow-dry to return the bird to its snow white beauty before release. Frequently the camera pulls out to pan the coast in widescreen images of waves crashing down on the raging ocean. Nicholas (de) Montsarrat was not wrong when he called his 1951 war novel: “The Cruel Sea”.

Robin Petre maintains a respectful distance from her subject matter avoiding anthropomorphism at all times while filming with a deeply humane perspective.  A really immersive film for those interested in animal welfare and suitable for all the family (except for the very young). MT