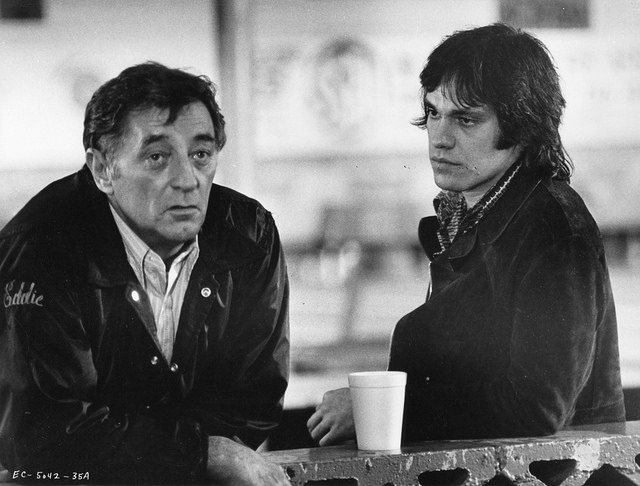 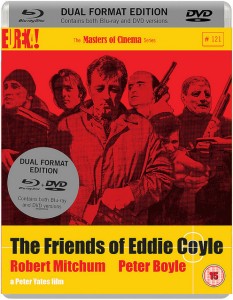 Peter Yates (Bullitt) pictures George V. Higgins’ aponymous novel in a dank and sleazy Boston where persistent rain evokes an atmosphere of melancholy that hangs very well with the last days of its hero’s demise.

Higgins was Assistant Attorney General of Massachusetts, before his first novel ‘The Friends of Eddie Coyle‘ catapulted him into a writing career. All his protagonists would primarily be identified by their language; his crime novels were lengthy dialogues with characters lost in the seedy underbelly of society, as they roamed around like James Joyce personas.

Eddie Coyle (Mitchum) is not even a has-been: he is a small time hoodlum who sells used weapons. In late middle-age he has no future and his wife Sheila (Carroll) and children face welfare if their ‘breadwinner’ has to serve a two-years stint in jail for driving a lorry with illegal goods. Enter AFT agent Dave Foley (Jordan), who tells Eddie: “You help uncle, uncle helps you”. Eddie has been already been rapped on the knuckles after his stolen weapons were traced back by the police. Turning snitch to avoid prison, he calls on chum and bartender Dillon (Boyle) who moonlights as an agent for the local contract killers. With friends like this, Eddie’s future is indeed as bleak as the local weather. Coyle supplies weapons to the Scalise/Van gang, who take a bank teller’s family hostage, before committing the heist. Eddie himself gets his weapons from Jackie Brown, whom he shops to Foley. But even this not enough: Foley wants more, but when Eddie gives him Scalise and Van, he is 24 hours late: somebody has squealed before him. On orders from the big boss, Dillon lures Eddie into a trap at an ice-hockey game of the Boston Bruins.

Victor Kemper’s camera trails slowly through the pool halls and house trailers of a desolate Boston: the colours are washed out like Coyle’s life. Mitchum’s Eddie limps through a living a nightmare, the bottle his only crutch to a desperate demise. He carries the film, towering above everyone and everything: an old-fashioned noir hero, lost in a low-life. The Friends of Eddie Coyle is a fine treatise; an elegy on a slow death. AS