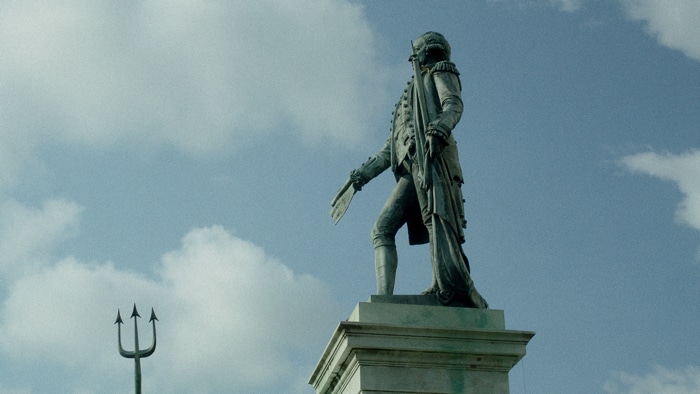 Sydney is the setting for this filmic breath of fresh air from promising newcomer James Vaughan exploring displacement and modern ennui with a humorous touch seen through the eyes of an easygoing young Australian. For fans of Joanna Hogg – this might appeal.

Setting off with a jaunty piano soundtrack the film opens with a rather awkward but entirely convincing conversation by two directionless millennials Alice (Diaz) and Ray (Wilson) who are set adrift in the holidays and discussing their putative travel plans in the balmy urban confines of a leafy Sydney’s suburb. Eventually they fetch up camping in a caravan by a lakeside. But the story’s focus then increasingly turns to Ray as his summer adventure broadens.

Defined by its freewheeling style and naturalistic performances (Wilson is particularly good) Friends and Strangers avoids a structured narrative playing out as a series of amusing vignettes that riff on the theme of wanderlust and endless travel for millennials before the constraints of Covid came along. Much of Alice and Ray’s time together is interrupted by members of the older generation adding context to their aimless behaviour and accentuating the solipsistic nature of the young characters un-centred existence. They say a lot but actually mean very little, and there is no real focus to their interactions. Maybe their whole style of language and dialogue results from their inherent lack of direction or need to do anything at all, dictated by the vague unpressurised lives they lead.

Cleverly observed and unhurried in its gentle style Friends and Strangers derives its humour from the fact that nothing really happens in their freewheeling laissez-faire lifestyle. Perceived slights and vague mood changes accentuate their lack of purpose and often arise out of the characters’ need to overthink situations, because nothing of real consequence ever happens as the days stretch out into a pointless void. Vaughan has certainly perfected millennial dialogue with its ubiquitous interpolations of ‘like’ and ‘kind of’ peppered everywhere. And dramatic heft – and texture – arrives in the scenes where Ray finds himself filming a wedding video for a wealthy art collector at an uptown house where the mounting stress levels are much more in tune with modern urban life – adding an hilarious Mr Bean twist to proceedings.

Dimitri Zaunders’ camera occasionally swings into widescreen mode giving us an enjoyable travelogue of Sydney’s sites and monuments not to mention some less crowded beaches and gorgeous modernist villas, where the Mr Bean accident occurs.

Slim but highly entertaining while it lasts, this is an ‘amuse bouche’ of a film that shows Vaughan as an acute observer of life, and a real talent in the making with a promising career ahead of him. MT