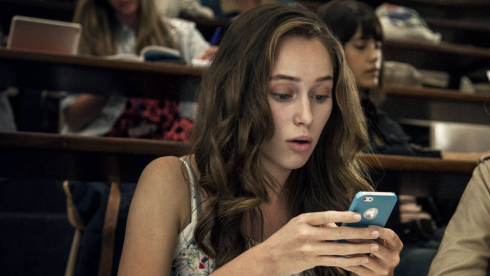 German director Simon Verhoeven (Men in the City) offers a self-ironic but critical contribution to the new Social Media Horror genre. Taking an seemingly normal daily occurrence, Verhoeven, who co-wrote the script, highlights the ever increasing sociological relevance of facebook and other media outlets of the same kind.

The story follows Laura (Debnam-Carey) a post-graduate psychology student who shares a flat with her two girlfriends Olivia (Morgan) and Isabel (Markham). Laura is ‘popular’ in the ether with over 800 friends on facebook and trying to add even more. But her integrity comes into question when she agrees half-heartedly to a Friend Request from Marina (Ahlers), a shy co-student who hides under her hoody. Laura is a psychologist in the making and should really have been more watchful, since Marina is signing in as Ma Rina, a sure sign of a split personality – but Laura just wants to collect friends. Marina then angles an invitation to Laura’s birthday party, purportedly “an event for two”, inviting her friends and family.

When Marina sees the party photos on Laura’s Facebook site, she flips and tells Laura “I will make you as lonely as I am” before committing suicide by hanging herself over a fire while looking into a mirror – a sure sign of black magic. Frightening videos then appear on the FB pages of the three girls and Laura’s boyfriend Tyler (Moseley) fails to calm her in the ensuing meltdown

FRIEND REQUEST is much more than a horror movie, the takeaway here is Verhoeven’s treatment of his main protagonists, focussing on their narcissistic need for continuous self-affirmation – a practice known in its most extreme form as “trolling for narcissistic supply” -facilitated and enhanced by a social media presence where there are always new people joining the circle of deceit and self-deceit in a carnival of self-glorification. Although many people use these networks to engage with like-minded individuals and family, FRIEND REQUEST on those who eschew critical intelligence, in favour of superficial self-indulgence.

Verhoeven’s film is the perfect pendant to Caroline Kepler’s novel “You”, about cyber stalking, where a man uses the social media accounts of the woman he stalks to control her, while killing his rivals. In this well-crafted creeper DoPJo Heim (Men in the City) captures the world of the ‘short generation span’ with breath-taking jump cuts that impressively showcase the tricks of social media. His horror images are seriously frightening; his use of night scenes and the finale in an old factory are perhaps not original, but show intricate composition. shot in the mellow light of Cape Town, South Africa, FRIEND REQUEST is a welcome take on the genre.