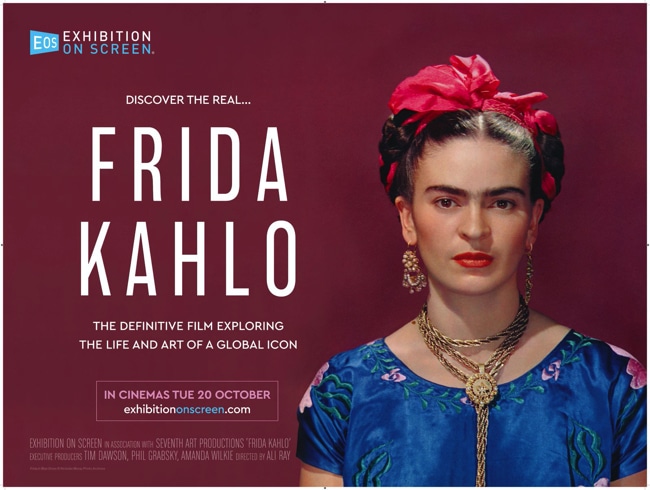 Mexican painter Frida Kahlo (1907-1954) had more than her fair share of set-backs in a short life marked by tragedy: after suffering from polio as a child, her heart was set on becoming a doctor. Eventually a life-changing accident in Mexico City proved the making of her as Mexico’s most well-known figurative artist.

Helmed by Ali Ray, Frida Kahlo takes a deep dive into the cultural history of Mexico in an engaging and informative study that starts in turn of the 20th Century Mexico City where Kahlo was born into a professional family of Germany heritage. Inspired by Renaissance art and European Avant-garde Kahlo channelled her pain (caused by a road accident) into portraits of family and friends, painted from her bed, with a special easel suspended from above. 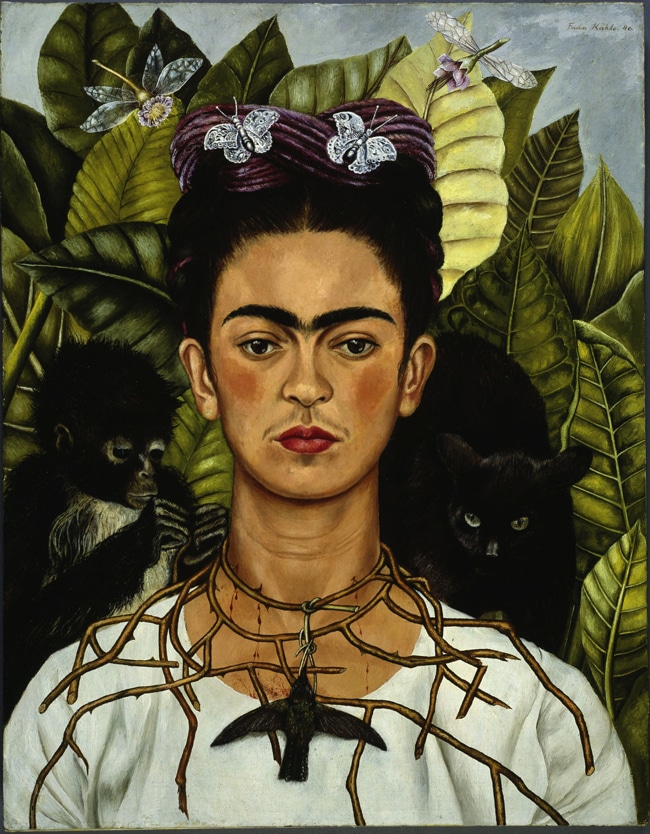 The straightforward narrative chronicles a life marked by Kahlo’s dedication to finding an artistic outlet to her feelings as a semi-invalid in need of constant surgical intervention to manage her afflictions. Her paintings explore post-colonial gender, class and culture at a time where her country was experiencing seismic shifts in its transformation away from Hispanic influences and back to Mexico’s native roots in magic realism and folklore. She was the first painter to depict a miscarriage (her own), and, as a devout Catholic, she even painted herself as the baby Jesus cradled in the arms of Mary.

Kahlo’s relationship with wealthy, political activist and painter Diego Rivera marked a significant turning point in her life in1928. Both were members of the Communist party and they married a year later – Rivera was 20 years older – to form a union that would be influential but turbulent for the rest of her life. Crucially it also meant that Kahlo was able to afford the hospital treatment that would keep her going. Despite his obesity Rivera was a flagrant womaniser – even sleeping with Frida’s younger sister and close confident. “I had two accidents in my life, the tram and Diego. He was by far the worst”. She reflected later in life.

Kahlo may have been avant-garde in her outlook, but styled herself as a traditional Tijuana woman and painted in the naif style of the ‘Mexicanidad’, a romantic nationalism which adopted motifs from the pre-colonial era. In the early 1930s the couple moved to San Francisco where Rivera – as part of the Muralista movement – took on an assignment to paint the walls of an industrial plant with historical murals, a mammoth undertaking that would later see the couple move to Detroit and New York. But while Rivera worked, Frida tried to have a family. Her 1932 work “Henry Ford Hospital” was considered the first painting to feature a miscarriage, an attempt by the 25 year-old Frida to process the shock. She continued to paint expressing her inner trauma using symbolism and iconography which bordered on the surreal. Andre Breton being entranced by her style, even though Kahlo herself never used any categorisation for her work. 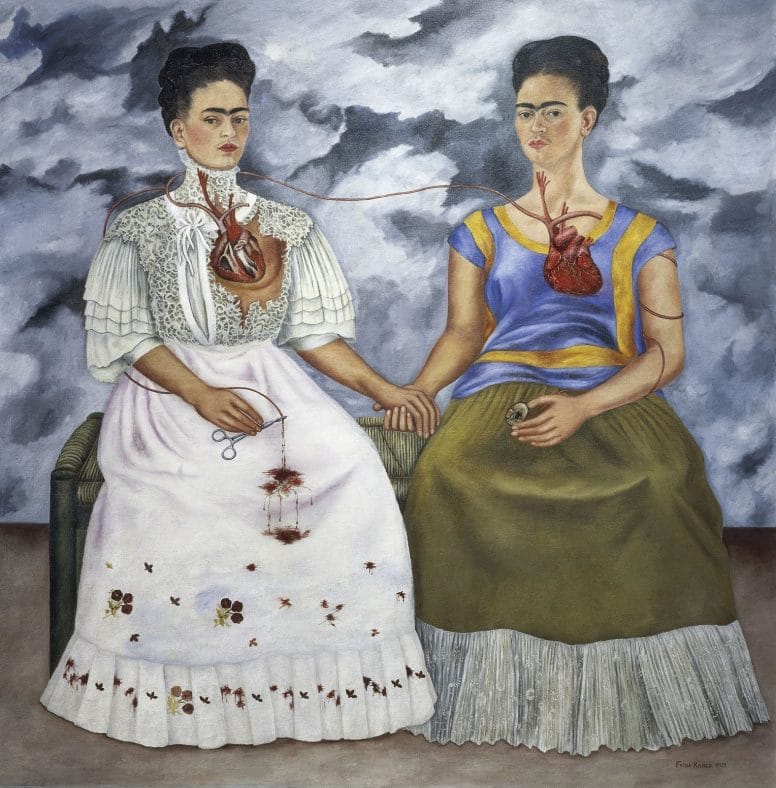 Frida yearned for Mexico and their eventual return saw the couple housed in separate dwellings, connected by a bridge where they could visit each other at will. It was at this time that Rivera took up with Kahlo’s younger sister, and the disappointed Frida turned to expressing herself through religious tableaux painted on copper and zinc – but not in the traditional form of an icon: one painting: “My Nurse and I” (1937) depicts her as the baby Jesus, and Maria as a Mexican woman. “The Two Fridas” (1939) is a split-personality portrait, whilst “Self-portrait with cropped Hair” (1940) is about her androgynous self, not surprisingly since she had affairs with women as well as men during her chequered sexual career. Her increasing alcohol intake, and Diego’s affairs with high profile lovers, led to a divorce in 1939, but they would remarry a year later.

Kahlo only had two solo exhibitions in her lifetime (the last one in 1953, just before her death). In 1938 her paintings were part of “Magic Realism”, an exhibition in Paris, where Picasso gave her critical acclaim. In Kahlo’s final years her paintings became more and more graphic in their depiction of trauma. “A Few Nips” shows a prostitute being murdered by her pimp, and “The broken Column” (1944) is a self-portrait, her body in a corset, her spine held together by bandages. “Self-Portrait with Thorn Neck Lace and Hummingbird” (1940) shows her with a monkey and a black cat – a semi-religious portrait which again is a role reversal of gender roles. Perhaps her most complete painting is “The Love embrace of the Universe, the Earth (Mexico), Myself, Diego and and Senor Xolotl “(1949), a quasi-religious panorama in which Frida holds the adult Diego like a baby in her arms.

Ray’s filming technique show the paintings at their most vivid and clear, but the academic Talking Heads become too intrusive: Anna Chancellor’s concise narration offering adequate insight, the paintings speaking for themselves. Kahlo’s work and personality elude any academic approach – her life and work defied categorisation as a unique expression of life experience couched in the enigma of an extraordinary woman who succeeded against the odds. AS