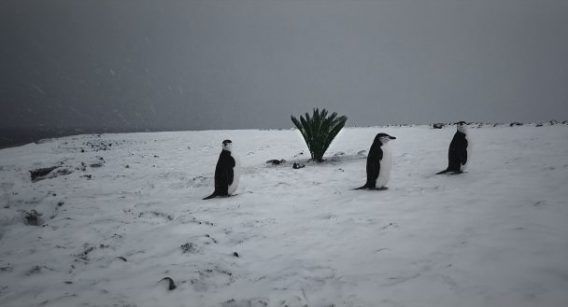 A palpable sense of isolation runs through this chilling experimental documentary that pieces together a series of interconnected sequences with an underlying narrative of climate change. Disassociation, dehumanisation and isolation are the main themes of Viera Čákanyová’s second full length feature documentary, following on from Slovensko 2.0 (2014) her collaborative film about the nature of her homeland.

With Frem, the Slovakian filmmaker attempts to offer a nuanced mood piece that relies on startling images and an atmospheric soundscape to put its stark message across: rather than being in control of the world, as we always assumed from time immemorial, humans are just dots on the landscape of a planet that is increasingly alien in our anthropocentric viewpoint.

A voiceover and an occasional buzzing electronic soundscape accompanies the opening scenes as a series of visually glitched images fly by creating a soulful memoire of seaside flora and fauna. Čákanyová impresses upon us her deep remorse about the eco-tragedy of a species, or a genus, that is gradually being wiped out, and may not survive for much longer. A frenetic and harrowing segment involving road-kill and slaughtered animals speaks of sentient death and extinction. Gradually the filmmaker gets into her stride and overriding concern: how would an AI-driven alien make a film?.

Antarctica, a place almost devoid of human life, seems an appropriate place to shoot a film with a dehumanised gaze. And this is where the film takes us next, scoping out the environment in eccentric camera angles and discombobulating time-lapse sequences that drift away over the riptides, windswept seascape and icebound wilderness devoid of life. Well almost: a lone penguin, and a stranded seal utter eerie cries. A figure climbs out of the sea, dwarfed by the magnitude of his environment. All this is set against a breathy soundscape of human-like exhalation as ice flows swirl and bob in the steely brine, creating art forms out of negative space.

The sea takes on a life of its own, shifting mysteriously as if dragged by forces beyond nature. These are the filmmaker’s tentative attempts to see things from an alien perspective, possibly powered by artificial intelligence. But would aliens even make a film about feelings of loss? Without souls, why would AI robots make – or share – a doc about memory, or environmental bereavement. How could it possibly serve them.? This brave and weirdly compelling film is for the lateral thinkers. MT