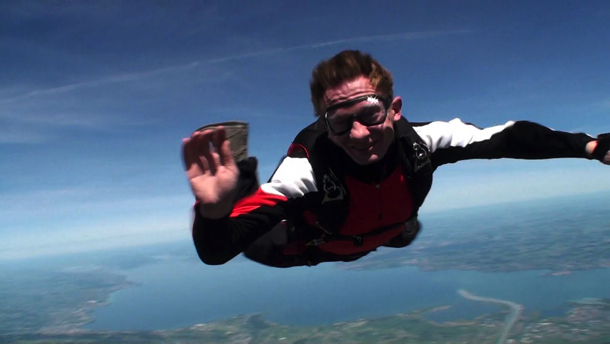 Mirjam von Arx’s courageous film is both a love story and ‘self-help’ documentary exploring the dangers of BASE jumping. In 2010 after a spell of internet dating, Mirjam meets Herbert, the man of her dreams. She is diagnosed with cancer in the same week. While she desperately fights for her life, Herbert is risking his by jumping from great heights with just a parachute.

Vertiginous camerawork from Samuel Gyger and Peter Kullmann show to what extent these daredevils take their lives into thir own hands in jumping thousands of metres from lofty mountain ridges and rockfaces just to satisfy a passion for danger. Did they get dropped on their heads as children or thrown downstairs, who knows? But the extreme sport of BASE jumping joins the long list of risk games along with gambling and free-diving: devotees have no choice but to follow their passion; it’s the only thing that makes them ‘feel alive’. Miryam is unfased by Herbert’s obsession, not wishing to stop him enjoying his passion at the early stage of the relationship. Three months later Herbert is dead. After a shaky start to a jump, he crashes into a rock face in Lauterbrunnen, Switzerland, and is discovered by his coach Andreas Dachtler. Speaking in heavily-accented English throughout the film, Miryiam admits she didn’t really appreciate the extent of the danger involved in handing over her own heart to man who, eventually, took it with it him into a mountain crevice. In the aftermath, Maryam conveys her pain to the camera but her treatment is not judgemental and pragmatic: this is an upbeat and watchable documentary that aims to instruct and edify, not just to offer another mawkish sob story of loss and misery.

In the months after Herbert’s death, Miryam plunges into despair but crucially, she is at pains to learn from his death. Being a filmmaker, she understands her craft and cleverly evokes the positive side to her loss with an intensely visual portrait of BASE jumping by harnessing the magnificence of the Swiss mountain scenery that makes the sport so exhilarating. Emerging through the stages of mourning she decides to discover more about Herbert’s final moments by visiting the scene of his death and talking to his colleagues and friends in a bid to discover whether the sport could help her in her own struggle for life. It’s almost as though meeting Herbert was somehow meant to prepare her and give her strength to fight cancer and conquer her fear of pain as she undergoes treatment, losing her thick, dark hair. Miryam is positive about the future, discovering as much as she can about his way of dying, despite the anger she feels towards Herbert. Out of all this comes acceptance. Her documentary offers a vision of the positive ways we can harness our own fears for the future, by grasping the nettle of life and controlling our own destiny. Werner Herzog explores this philosophy in the final moments of Heart of Glass: no one is able to avoid death but we can control our own destiny: the ideology behind BASE jumping seems to indicate that by taking over control of our lives and dicing with death, we can face the end with power and serenity. MT