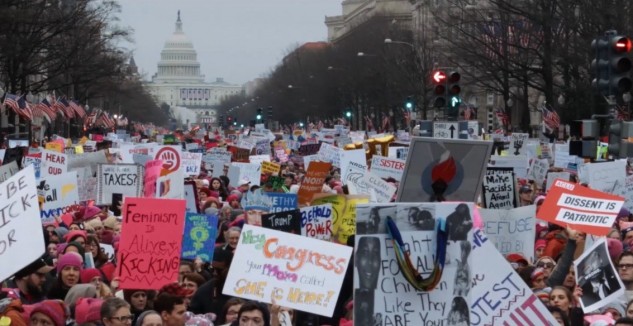 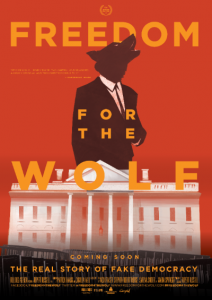 First time director/writer Rupert, son of the great Ken Russell, shows a rather frightening political reality emerging worldwide: the demolition of democracy as we know it, as a system which allows alternatives and protects minorities. It is replaced by nationalism and religious tyranny, always serving the titular Wolf: the elite, only a percentage of the population, which varies from country to country.

The “Occupy Movement” in Hong Kong, which started in 2014, was protesting against the Chinese government’s subversion of democracy, nominating 12 candidates from which the citizens of Hong Kong could choose their nominal leader – nominal, because who ever was chosen, would put China’s interests first. The movement was mainly supported by students, and was quite successful in blocking the streets of the centre city with mass sit-downs, the occupants living in tents. The movement faltered when taxi drivers and shoppers begun to organise against their restricted ‘freedom’ to drive and shop. This is the result, of the majority of the middle-class Hong-Kong population having a rising living standard, so they abandoned the movement, they had supported at the beginning.

In Tunisia, the government of Moncef Marzouki, ruling between 2011 and 2014, has been replaced by a more authoritarian regime. The reason was mainly that the Marzouki government, which was born from the ‘Arab Spring’, did not provide economic progress; on the contrary, prices for foodstuffs – such as canned tomatoes – went up drastically. Now, under the leadership of President Beji Caid Essebsi, prices have still not come down, but there is a new intolerance rising: cartoons of the Prophet, or dancing sparsely dressed in public, are punished with jail, and the Education Minister, who had tolerated these basic expressions of freedom, was censored for “sleeping on the job”. One of the interviewed is sure that “the less economical growth, the more people want to strengthen the religious ideology”. And the laws of the current Muslim government of Tunisia are the proof.

In India, President Narenda Modi, won his election in 2014 on the back of a religious campaign. “2000 years ago, there were no Christians, 1400 years ago there were no Muslims. There were only Hindus in Rome and Mecca”. And even when in office, his party inflamed the political war between the religions – 80% of the Indian population is Hindu – with scare stories: Muslim families train their men to seduce Hindu girls, giving the youngsters new motor-cycles and nice clothes. And when the Hindu girls have born them eight Muslim children, they are sold into slavery. Six month before the election in 2014, Hindu’s provoked riots, in which over 600 Muslim and 240 Hindus were killed. But again, the middle-classes are profiting here, with more spending power, whilst the rural population is suffering, because the government is forcing them to sell their land for minimal prices to corporations.

In Japan, the police had resurrected a law from 1940, which forbade dancing. Secret policemen infiltrated clubs, and charged the young clients with the offence, which would carry a punishment of one million Yen and six months imprisonment. Only a vigilant judge prevented the cases going to court. And finally, in the USA, after Trump’s win in last year’s election, illiberal trends continued. The police now has a huge arsenal of weapons at their disposal, creating a windfall for the weapon industry: among them grenades, chemical weapons, armoured vehicles, missile launchers and even nuclear weapons. And the whole election process has been undermined after the Supreme Court delivered in 2010 a landmark ruling regarding Campaign finances (Citizens United vs FEC), allowing corporations to spend unlimited amounts supporting the campaign of their chosen candidates. Before this ruling, there were two parts of the election process: the primaries, followed by the election itself. But now, about 0.2 % of the population, the super-rich, decide which candidates they will support, making it impossible for outsiders to outspend them. It is one of the ironies of Trump’s victory that the majority of the small business donors who supported his campaign, will be the losers, since the interest of the big corporations will be certainly served by the Trump administration.

Freedom for the Wolf paints a dark picture: worldwide democracy, promising diversity, is replaced by a global wave of ill-liberal policies. Interests of the few are converging against freedom. Nationalism and religious bigotry are on the front foot, and tolerance has been replaced by consumerism as a leading goal. Russell has created a fine film that would make his father proud. Cleverly he ensure that younger viewers will be not to be put off by too many “Talking Heads’ – he has used imaginative cartoons to liven up the viewing. AS