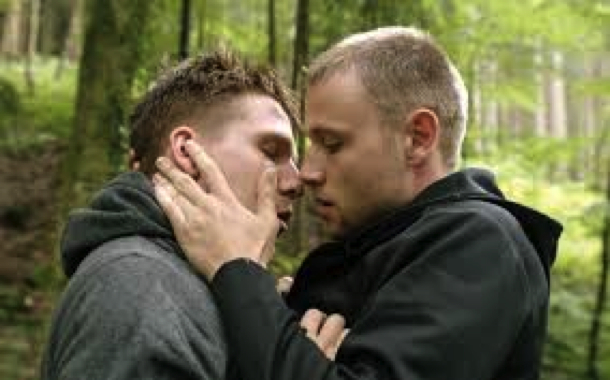 In Stephen Lacant’s gay-themed drama Free Fall, the Police Academy is a hotbed of young, fit trainees all preparing to serve their country.  One of them is Marc (Hanno Koffler) who is blessed with a great sex life, a girlfriend Bettina (Katharina Schuttler) with a baby on the way and the support of his parents, who understand the rigours of Police life.  Into this seemingly perfect state of affairs, drops Kay (Max Riemelt) a fellow recruit who has heart set on Marc and pursues him hotly despite Marc’s hostile protests to the contrary. Why then does Marc fall for the temptations of a gay fling with a fellow recruit, who also has a girlfriend?

Writers Stephan Lacant and Karsten Dahlem tackle this intricate story with skill and aplomb, creating a stylish and thoughtful drama set in the lush forests of Southern Germany.  Free Fall is a tense and tight-lipped affair that sees Marc’s burgeoning homosexuality slowly take light like a smouldering bonfire. It gives the impression (quite convincingly) that if it weren’t for social conditioning, any one of us is open to any sexual persuasion, given the right opportunity and chemistry.  Kay offers such a persuasive possibility and such an exciting contrast to Marc’s staid and quotidian lifestyle with Bettina,  that this whole premise becomes entirely plausible.  But without this opportunity, would Marc have discovered his nascent desire for same sex satisfaction?

Stephan Lacant presents his case with alarming simplicity but is never judgemental. As Marc becomes increasingly  inventive in his love-making with Bettina, his boring stereotype of a dull marriage rears its ugly head. And as his homosexuality develops Marc emerges as the more interesting character, where Bettina becomes clingy, oppressive and needy.  His parents are predictably one-dimensional and disappointed once Marc’s secret emerges and even his work colleagues are suspicious and mean-spirited in the middle class area of Baden-Wurttemberg.  Free Fall, is a metaphor for straight-laced lives and uniformity in a society where the only rewards come out of sticking to the mainstream, toeing the line and keeping up with the Jones’s. Instead of trying to understand Marc’s complex response to his sexual unconformity, Bettina is hostile and unyielding: “Are you gay? – then if not, what are you Marc?” As Marc, Hanno Koffler’s performance is disarmingly moving and exultant by turns.

Free Fall has the feel of Flying Skyscrapers, shot through with the same resonating sensibility and aqua-tinted aesthetic. Visually it may lack the inventive creativeness of Skyscrapers but evokes a far greater sense of loss, delusion and shame, particular through the characterisation of Marc.  Stefan Lacant has made a film that tackles some important issues and does so with engaging insight, making even mainstream audiences prick up their ears. MT

FREE FALL IS OUT ON DVD FROM 27 JANUARY 2014. AVAILABLE FOR PRE-ORDER THROUGH AMAZON.CO.UK