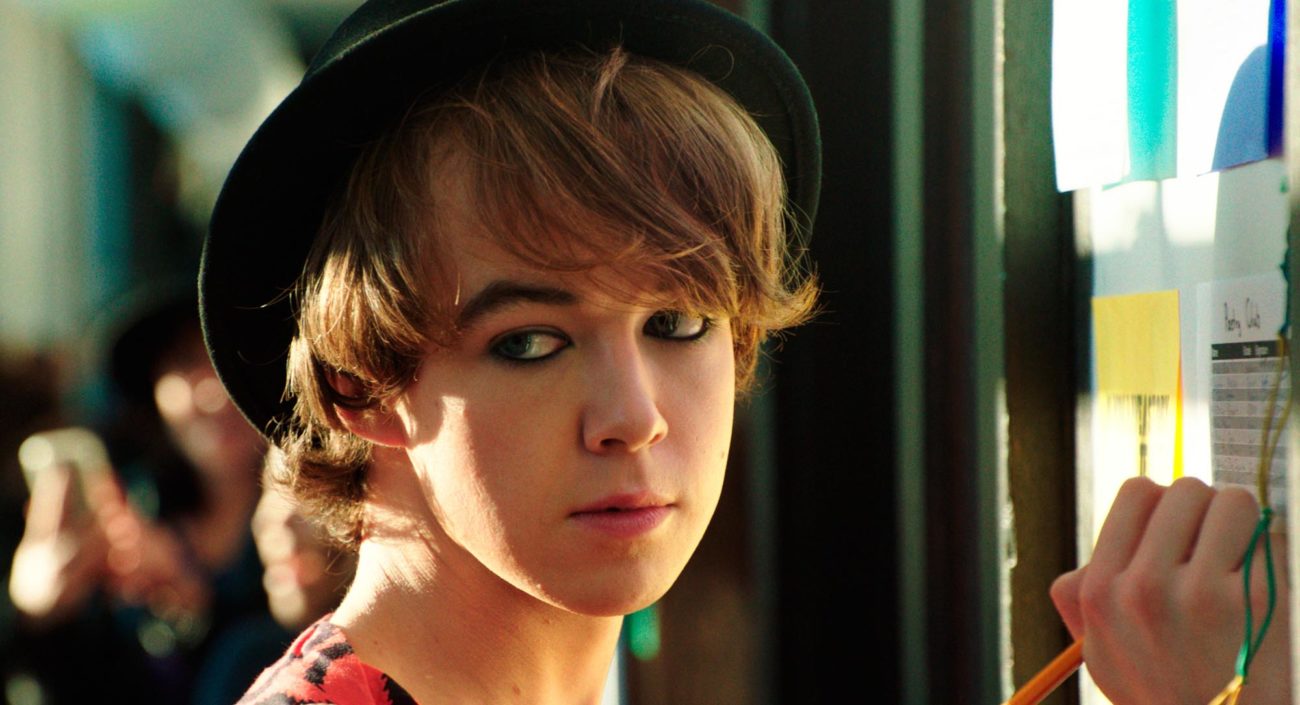 Actor, producer and now filmmaker, Trudie Styler works her contact list to great effect in cobbling together this middling teen-outsider musical powered by an impressive central turn from Alex Lawther. He plays Billy Bloom, a spirited and thoughtful young man who finds his gay identity at odds with his new surroundings when the family move from New York to a Red Neck southern state.

Thanks to DoP Dante Spinotti, Freak Show opens stylishly with a glamorous Bette Middler (as Muv) dancing with her little son (Eddie Schweighardt as the young Billy). The two are as thick as thieves but when Muv falls off the waggon, leaving Billy with Daddy ‘Downer’ (Larry Pine actually looks like Lawther), the movie soon loses its pacy allure, and dissolves into a series of musical vignettes that piece together Billy’s gradual empowerment from victim to victor. This schematic sprawl lurches from one scene to the next, hanging entirely on Lawther’s capable coat tails – and there are some striking rigouts thanks to Colleen Atwood and Sarah Laux – and Billy gets the best lines: “I just moved here from Darien Connecticut, the hometown of Chloe Sevigny”.

Intended for a teen audience Freak Show brings to mind Amy Heckerling’s 1995 comedy Clueless, and is adapted from James St James novel by Patrick J. Clifton and Beth Rigazio, who also wrote Raising Helen. Rather than finding her own distinct voice, Styler cherry picks liberally from reliable stalwarts such as Oscar Wilde and Plastic Bertrand whose quotes and music may not be known to young audiences.

After the conservative kids get used to Billy’s outlandish attire at his new school, he soon becomes friends with tousled haired dreamboat Flip Nelson (Ian Kelly), who he secretly fancies, meanwhile Flip is a bland but underwritten teen idol who remains unconvincing as a real person. Billy suffers a brutal homophobic attack that lands him in a coma and hospitalised, but this deepens his thing with Flip and he’s persuaded to run for homecoming Queen. There are some witty exchanges between Middler’s Muv and Dad’s housekeeper Florence (Celia Weston) who flags up the potential woes of Billy’s adolescent crush with Flip, and the gauche handling of this particular conflict resolution is one of the film’s many flaws. But these will likely slip off the radar of the film’s intended audience – it premiered at Berlinale’s 14K generation plus sidebar. See this for Alex Lawther and his star performance as Billy. MT