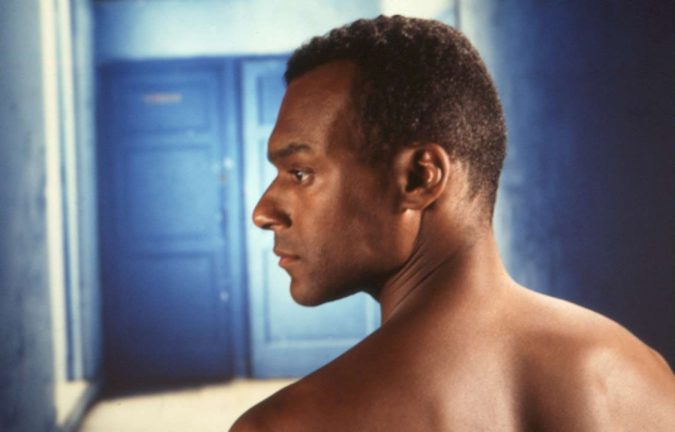 Franz Fanon: Black Skin White Mask is one of the most important films about Martinique and racial identity, along with Euzhan Palcy’s Rue Cases Nègres (1985). And here in Locarno 72 to present a re-master of the poetic film essay is its British film-maker Isaac Julien.

Julien co-wrote this vibrant, collage-style biopic that explores the life and work of psychoanalytic theorist Franz Fanon (1925-1961), who emerges a controversial and restless figure as remembered by those who knew him. Born in Martinique, he was educated in Paris then worked in Algeria, where he felt he could make most impact with his psychoanalysis during the 1950s. His life’s work was to support the anti-colonial struggle and those suffering from its repercussions, but he sadly died of leukaemia in his thirties before publication of his most famous book, The Wretched of the Earth, which became an indispensable study tool during 1960s.

This documentary-drama hybrid is really brought to life by British actor Colin Salmon who is rather too suave, tall and good-looking to be like the man himself, although we get the gist of Fanon’s charisma in these colourful vignettes where he appears in various dapper outfits, stoking a pose and glaring suitably. And there are the usual talking heads, mostly intellectuals, and his brother

There’s a bit of poetic licence when we see Fanon (Salmon) removing the chains from a mental patient in one of Algeria’s psychiatric hospitals where sallow-skinned, emaciated men peer out of their grim existence. No doubt this serves as a metaphor for him unburdening their souls. And this is what Fanon was all about. The bitter conflict takes up the lion’s share of the shortish feature and Julien offers up fascinating black and white archive footage of street battles during the War of Independence. The rest of the film wades through rather dense intellectual debate as to the various definitions of racism as seen by gay men, women and arch feminists – and this comes across as rather complex, and depends from which angle you approach it as to whether it makes any sense. Fanon himself married a white woman but another woman, identifying as a feminist, claims that Fanon regarded black women who were attracted to white men as, by definition, ‘victims of the slave mentality’.

Fanon had some fascinating and quite revealing ideas about the veil which he expounds by illustrating how, in Algeria, veiled women often carried guns and grenades to their male counterparts during the war, without attracting suspicion. And these women where regarded as “beyond reproach”. That certainly resonates now decades later with the war on terrorism.

Frantz Fanon: Black Skin, White Mask does reveal some important issues although some of his ideas and perhaps his untimely death precluded his exploring further and resolving some of the more complex and controversial matters he highlights, such as colonialism being made up of “visual experiences, ‘the gaze that appropriates and depersonalises”. But this is also the case with the gender debate that is still raging and is part of our experience as humans. As a gay filmmaker Julien comments on the white man’s desire for the black man’s body. But this is also true of the white (heterosexual) woman for the dark male. This is not racism but merely sexual preference. Don’t opposites attract? An engrossing and fascinating film. MT
BLACK LIGHT RETROSPECTIVE | LOCARNO FILM FESTIVAL | 7-17 AUGUST 2019
Copyright © 2022 Filmuforia