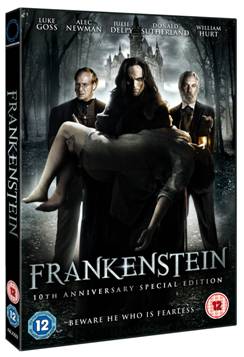 There have been endless re-workings of Mary Shelley’s saturnine Gothic tale.  The good thing about this made for TV 10th Anniversary Edition, is that it stars Donald Sutherland, Julie Delpy and William Hurt.  It also has pop star Luke Goss in the role of the monster fashioned from human corpses.  The film opens as Victor Frankenstein (Alec Newman) fetches up on the deck of an icebound trawler in Arctic waters having being hotly pursued across the ice, in sinister circumstances.  Captained by one Robert Walton, who is exploring the North Pole in the hope that the icy winds will blow away a serious case of writer’s block, the ship provides refuge as Frankenstein recounts his life story, growing up in a wealthy Swiss family at the end of the 18th Century.  The rest is history. What follows here is a bland but respectable costume drama that lacks drama or terror, for that matter, but clings faithfully to the original storyline.  An excellent assembled cast make a decent go of the pedestrian script and lacklustre direction. That said, the tone is more redolent of anguish than Gothic horror.  A perfect backdrop to those snoozy Sunday afternoons. MT

The miniseries originally aired on Hallmark cable channel in  2005 is now available on DVD.