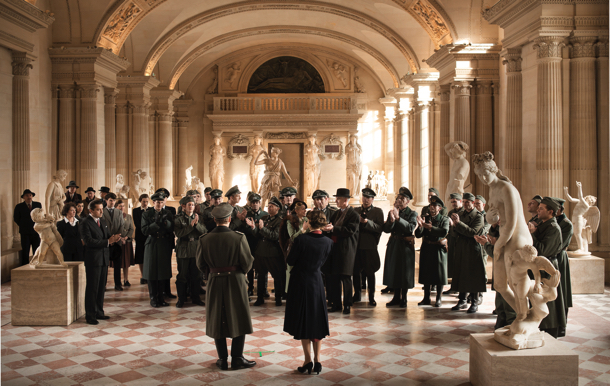 Sukurov once again reminds us what cinema could be: an intellectual tour-de-force of documentary, essay and feature: as such, FRANCOFONIA is entertaining and absorbing fare.

FRANCOFONIA is foremost a film about German-French relationships on a mostly cultural level; the director calling the link between the two nations “sisterly” which is an unusual word to use considering the many wars they fought with each other – unless he is hinting at sibling rivalry here. The star is certainly The Louvre where the two protagonists: the French director of the museum, Jacques Jaujard (Lencquesaing), and the German officer, Count Franziskus Wolff Metternich (Utzerath), in charge of cultural affairs for the German occupiers, fought in a low-key manner between 1940 and 1942. Metternich was then recalled to Germany not having given in to the Nazi leadership whose main aim was to steal the art treasures – a task they managed successfully later. Jaujard, who worked for the French Resistance, could rely on Metternich for help, a favour which was returned after the end of WWII, when Metternich needed help for the de-Nazification trial. But in the two years, Metternich, a Nazi Party Member since 1933 was civil while trying to delay the art robbery of his superiors, like a good Nazi.

In the summer of 1940 it was clear to the M Jaujard that his Museum was in danger, haunted by the spectre of Germany as the French government surrenders and the German army arrives in force. Archive footage of the era shows Hitler casting his beady eye over the Eiffel Tower and the Champs Elysees, desperately looking for the Louvre and its treasures.Fortuitously the perspicacious M Jaujard, the museum director, has taken precautionary measures and does not flee his museum when Count Wolff-Metternich, the officer commanded by Hitler to supervise France’s art collection for the Nazis,  arrives at the Louvre to find its most important works have vanished. Jaujard has had them moved to Chateaux hundreds of miles away in preparation for the German bombings – and Metternich – who made the same wise moves in Germany – thus protects the French patrimony from the thieving hands of Hitler, Goering and Goebbels. In this ‘sisterly’ way Jaujard (a suave Louis Do de Lencquesaing) and Metternich (a suitably aristocratic-looking Benjamin Utzerath) are bought together with their love and appreciation of Art.

Marianne, the typical French heroine who chants “Liberté, Egalité, Fraternité” and self-obsessed Napoleon – who points to himself in paintings around the walls – are the ghosts who haunt the Louvre in their traditional costumes. Napoleon claims that his sole purpose of waging war was to raid countries for their art treasures. And Sokurov takes us on a guided tour of these treasures, marking out the particular European propensity for portrait painting, enabling us to identify ourselves hundreds of years ago. Something that, he points out, the Muslims did not do. The Mona Lisa is given the most attention, with her enigmatic smile.

Often the director is seen sitting in his office, talking to a sea Captain on a ‘ship to shore’ computer link. The ship is bearing artworks and clearly many thousands have been lost at the bottom of the sea during their transportation around the globe, by trophy-taking warlords.

FRANCOFONIA is the first Sukurov film which shines a positive light on the Soviet Union. Bruno Delbonnel’s breathtaking cinematography successfully recreates the wartime effort in Paris, and the extensive archive material gives so much information and philosophcal debate that one viewing cannot do justice to this masterpiece. This is a film to savour.

ON RELEASE AT SELECTED ARTHOUSE CINEMAS FROM 11 NOVEMBER 2016