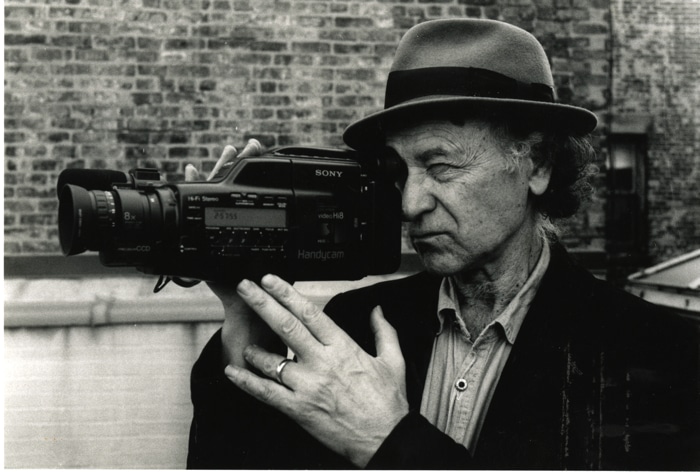 US director/producer KD Davison has chosen the avant-garde filmmaker Jonas Mekas (1922-2019) as the subject for her first feature documentary scooping the Best Documentary prize at Venice Film Festival in the process.

Jonas Mekas – the “Godfather of Avant-garde Film” – was a prolific filmmaker as the architect of the movement. Told in four chapters this is a chronicle of a life-long odyssey, and Davidson clearly worships at his alter, an approach that is the film’s only flaw.

Born in Lithuania, Jonas and his brother Adolfas eventually arrived in the USA settling in Williamsburg, Brooklyn after leaving Lithuania for Vienna in 1944 via the German Labour Camp of Elmshorn near Hamburg. Jonas had become a published poet in his homeland and became obsessed with cinema after visiting Amos Vogel’s ground breaking “Cinema 16”.

In 1954 Mekas founded the alternative “Film Culture Journal”, four years later he became the first film critic of “The Village Voice”. He was co-founder of the “Filmmakers Cooperative” (1962) and – perhaps his greatest contribution to film history – he started the “Anthology Film Archives” in 1964. That same year, with Lionel Rogosin, Mekas began to organise filmmakers in the “New American Cinema Movement.” 1964 was a proactive year for Mekas but the downside was his arrest for screening Jack Smith’s Flaming Creatures and Jean Genet’s Un chant d’Amour.

Kenneth Anger and Allen Ginsburg were often guests in Mekas’ chaotic house, as was Jim Jarmusch, who filmed his short Coffee and Cigarettes in the dilapidated “Anthology” building, before it became the functioning centre for the production and distribution of about 600 avant-garde features. A miracle then that Jonas still found time to shoot his own films, Guns of Trees (1961) and Walden (1969) were the most successful of the early period.

Ironically Mekas’ The Brig (1964) had found admirers in the Soviet Union who lauded him for his critique of the USA. Mekas was invited to show his feature in Moscow in exchange for a visit to his family in Lithuania. There are moving images in Reminiscences of a Journey to Lithuania (1972) showing a reunion with his mother who had waited 25 years to see her son again.

In 1974 Mekas married Hollis Melton and his two children Oona and Sebastian serve as executive producers of this documentary. Oona’s birth was filmed on camera and she is moved to tears when shown images of her childhood, very much aware that her father never stopped being a poet, his obsession with spending at least ten minutes a day with his camera was his way of creating a daily poem. Later we see him filming his granddaughter.

The filmmaker Pete Sempel shot a trio of Mekas features: Jonas in the Desert, Jonas at the Ocean and Jonas in the Jungle. There are extremely sad songs, and Mekas is seen still traumatised by his youth. Scorsese called him “the prophet, he showed us the way”. Mekkas also became firm friends with John Lennon and Yoko Ono, but he never stopped filming his family: Out-takes from the Life of a happy Man, As I was moving ahead occasionally and Paradise not yet Lost (aka Oona’s third Year). Cats also grab the limelight occasionally challenging humans with their beauty and grace.

In 1999 Hollis Melton was adamant about having her own independence and started to move out – a process which took until 2004. The scenes of her gradually taking her belongings are heart-breaking, throwing Jonas into a life he did not want: “What is my life all about, 30 years – now this empty space. Do I still have time to do something with my life. Nobody but the camera, she is my only friend?”.

On film, a ladybird crawls around the rim of a glass and Mekas comments: “this is the human condition”. But his camera rolls on, for at least ten minutes a day. And suddenly there is worldwide recognition, exhibitions all over the place. He had turned the trauma into energy. In old age, he had found a new form of relationship with his son, they had become best friends. Oona is seen rummaging around Jonas’ flat, looking for Christmas decorations. “We always find little fragments. Intimate things from his heart and soul. Poetry is his films, he managed to catch some of the beauty.”

DoP Bill Kirstein creates rather conventional images that reflect the structure of the narrative. But it would have been too much to ask for a ‘Mekas’ style’ film. In this way the documentary is accessible for newcomers to Mekas’ work. A filmmaker who was also clearly in love with his family and his cats. AS