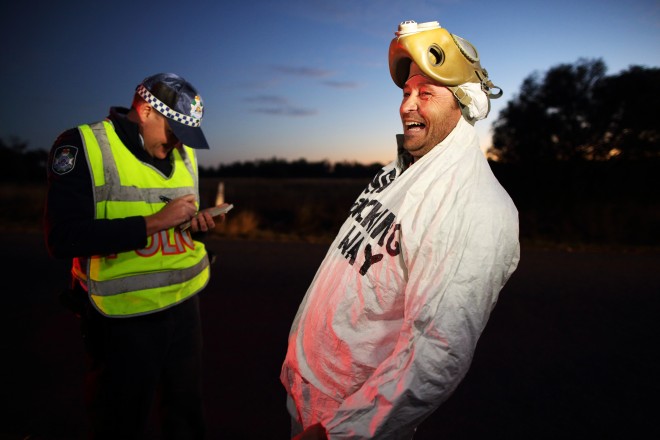 Director Richard Todd introduces us to the Australian Anti-Fracking movement with a documentary that features an unlikely hero and is much less less concerned with facts than Josh Fox’ Gasland. Instead, the controversy is infused with humour, a sense of adventure and even a real love story. And although FRACKMAN sometimes echoes the spirit of Crocodile Dundee, Todd nevertheless tells a frightening story.

Wayne Pratzky is in his forties and has spent most of his life surfing and partying. “I wasn’t born into this kind of thing. I used to cut down tress, drive a diesel four-wheel drive and harvest kangaroos. I’m the worst environmental activist the world’s ever seen”. Somehow around his 40th birthday, he saw the light and became a farmer near Chinchilla in Queensland, Australia’s second largest State. When CSG (Coal Seam Gas) companies like Halliburton (Involved in the Deepwater Horizon explosion) and Schlumberger made moves to start fracking on the Tara Gas Field, Pratzky protested but officials of the Queensland government denied him – and all his neighbours – any rights to stop the drilling. Shortly afterwards some children on estates near the Tara field became ill due to the emission of poisonous gas (hydrogen sulphide) 24/7 from the pastures. Frogs died, and the water of the gas fields was unfit to drink. Gratzky and his friends joined the Western Downs Alliance, part of the Anti-Fracking movement in Australia. The continent is covered by gas fields that are 18 times the size of Great Britain. And every year the industry needs 22 billion litres of water – for which they pay zero!

Gratzky went into overdrive and the protesters started to block roads to stop the huge lorries with the drilling equipment. Fines of 50000 Australian Dollars (roughly £250k) did not deter the protesters, who donned white jump suits with the message “No fracking Way”. They protested in Sydney and collected samples from the gas fields to prove contamination of the environment caused by abnormally high values of heavy metal, arsenic and lead in the ground and water. Queensland’s environmental inspectors were no help to Gratzky and his friends either: they took the side of the companies. In the nearby harbours, the fishing industry suffered too, since the poisonous water was pumped into the ocean, killing, among others marine life, half the dolphin population of the area.

But now for the romance: Gratzky had met Pennsylvania girl Wendy Atkinson, over the internet, whilst looking for campaigners, and their relationship deepens, while the struggle continues. FRACKMAN takes the form of an adventure story, narrated by Gratzky. The illegal operations by night, and huge road blocks are straight out of a feature film, or better, a Marvel comic where Gratzky with his white jump suit fits in easily. But there is enough content to show the serious aspects of Fracking, and the images of the poisoned water and the dead fish are frighteningly sad. DOP Dan Schist’s panorama shots showing how the countryside is ruined by the drill towers are particularly evocative. FRACKMAN is perhaps not a documentarian’s dream, but is somehow more effecting because it engages our empathy – a rare and clever thing. AS