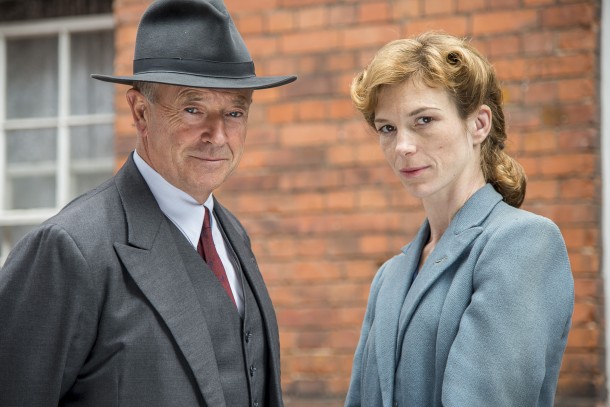 This quietly gripping post Second World War series, written by Anthony Horowitz, has been a firm favourite since 2002 with around five million TV viewers at the last count. Series 8 finds reliable stalwart Christopher Foyle (Michael Kitchen), now working as a highly professional M15 detective tasked with investigating three cases both on the home front and abroad relating to past real-life Wartime events packs a particularly relevant punch as is possibly why the series, which some find rather too sedate, appeals to more mature audiences.

Slow-burning but superbly acted by a Sterling British cast, Kitchen portrays Foyle as breviloquent, gently sardonic and certainly no fool when it comes to dealing with wrongdoers: flushing out suspicious characters in these three new stories. Meanwhile his feisty assistant, Samantha Stuart (Honeysuckle Weeks), is going to great lengths to conceal another big secret, her pregnancy.

HIGH CASTLE: Corrupt Nazi businessmen come into the spotlight when a University Professor is found brutally murdered in a London Park after working as a wartime translator in Nuremberg linked to Global American Oil. Foyle’s boss, Sir Alex Myerson, is desperately trying to defend the American ‘good guys’ who run the energy company, but it’s clear to see that young executive, Clayton Del Mar, is as slippery as a barrel of West Texas Intermediate. John Mahoney saves the day in a serious role (no sign of Eddie, sadly).

ELISE: Foyle’s colleague Hilda Pierce has a knack of being both unpleasant and indomitable. After surviving a point blank shooting, it appears that the shots were fired by a traitor within the ranks of the Special Operations Executive and Foyle is forced to examine his own inner sanctum to expose the truth.

DVD includes interviews with Anthony Horowitz and extensive coverage of the truth behind the stories.