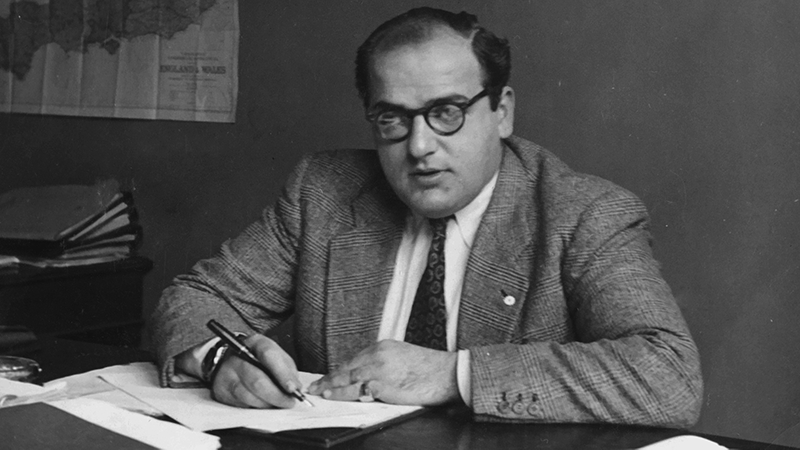 This debut feature documentary by Lucile Smith tries to uncover the life of Salomon Jacob ‘Sally’ Noach, who saved at least 600 Jews and other prisoners of the Nazis in occupied France, masquerading as a Dutch Consul. His children, Lady Irene Hatter and Jacques Noach travel to Europe and the USA, to speak with survivors and their children about the role their father played in their liberation.

‘Sally’ Noach was born in the Dutch town of Zutphen in 1909. Early on in his life, he showed great initiative, leaving school at twelve, to work in the hotel business. At the age of 28 he had his own car, working in tandem with his father as a travelling salesman. When war broke out, he was in Brussels, whilst his family stayed in the Netherlands. After the German occupation of France in 1940, he took the train to Paris, starting a chaotic journey which left him and his refugee travellers, mainly Jewish, stranded after four days in the Pyrenean village of St. Julien. Even though Noach helped to organise this ‘refugee camp’, it was clear that the little village could never sustain such an influx of refugees. So he went to Toulouse to the Dutch consulate, making friends and connections, before moving to Lyon, which was ‘the capital of Refugees’. Working as an interpreter for the Dutch consulate official Paul Marx, with the German Military Tribunal. He had also met German Camp commanders, and after forging identity papers, he went to the camps demanding the release of all Dutch prisoners – even freeing numbers of other nationalities. But his greatest coup was the ‘liberation’ of prisoners from the ‘Iris’ stadium at the outskirts of Lyon in 1942. When Klaus Barbie arrived in Lyon in the same year, to start the deportation from the Drancy camp to Auschwitz, Noach left and arrived in London in 1943. He was received by members of the Dutch Government in Exile, and the Queen, but his name had been blackened: he was suspected of being a profiteer in Lyon’s Black Market – since that was the only place refugees could trade, being excluded from all other avenues. Noach married, had three children and moved back to the Netherlands, where he was active in the carpet trade, never talking to his family about his experiences in WWII. Posthumously he was awarded the highest Dutch honour in 1981, only a year after his death at the age of 70.

This is a succinct and well-made documentary, but Lady Irene’s travels to meet survivors and learn about her father’s endeavours suffers from a bit of grandstanding by Irene, who rather overplays herself into the foreground. Some clumsy scenes and transitions could have been avoided by a more seasoned director. Surely, ‘Sally’ Noach himself, an adventurous man of no-nonsense, would have agreed.AS