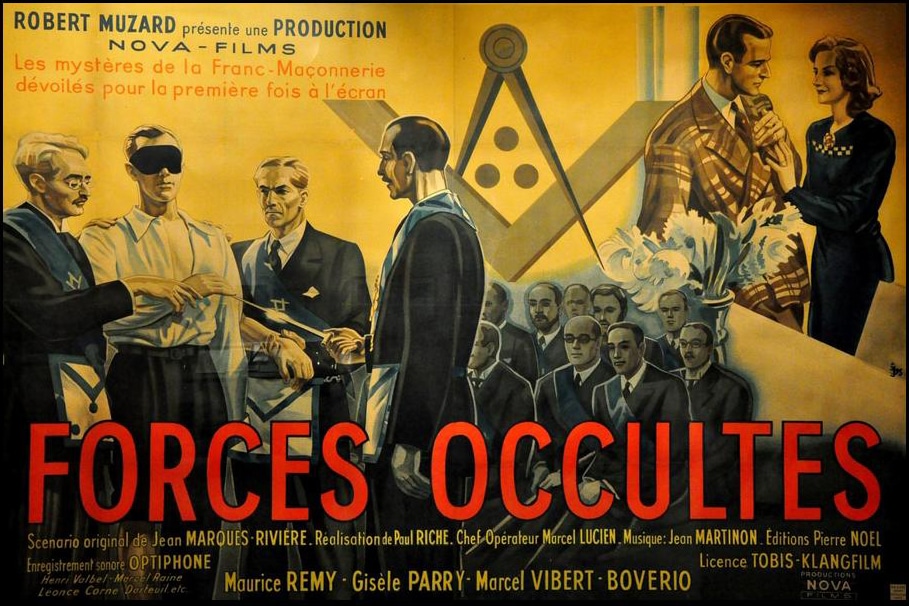 Freemasonry continues to be viewed with deep suspicion in many quarters to this day, and like the Jehovah’s Witnesses they attracted the hostility of the Nazis. Hence this diatribe against them made by a group of Vichy enthusiasts during the Occupation.

Forces Occultes is bookended by two pieces of crude symbolism that most obviously nail the film’s colours to its mast as a sock puppet on behalf of the Propaganda Abteilung which had commissioned it. The first is a childishly constructed model spider with a Masonic square and compasses on its back coming to rest on a map of France; and at the end a dastardly Jew gloating over a blazing globe of the world before the caption ‘Fin’ comes up framed within a Star of David. A map is also employed at the outset to demonstrate that only those countries that were under fascism during the thirties were free of “Jewish-Masonic influence”.

We are then introduced to Pierre Avenel, an idealistic young member of parliament seen railing against both the capitalists and communists during the early thirties (in a scene actually shot in the currently disused Chamber of Deputies at the Palais-Bourbon; the French parliament having been transferred to Vichy). He catches the eye of the Masons in parliament and requires remarkably little persuasion to join them, despite the reservations of his wife. A quarter of the film’s 53 minute running time is then given over to a detailed enactment of the ceremony which marks Avenel’s initiation (and Yes, he does wear his right trouser leg rolled up). The ceremony over, he is shown how the famous handshake works and is immediately inundated with requests for strings to be pulled on their behalf by the cartel of spivs – some of them obviously Jewish – that to his distaste he now finds himself beholden to.

The Stavisky scandal is name-checked and the ensuing anti-government riots dramatised; and we now learn that the “mediocre social climbers” Avenel is being forced to associate with are merely pawns in a much larger game that extends all the way up to George V and President Roosevelt and whose ultimate objective (announced by a very Jewish looking speaker at a lodge meeting) is war between France and Germany. The film ends in September 1939: Mission Accomplished.

With the Liberation of France the year after it’s release, many of this film’s makers had to make themselves scarce (Maurice Rémy, who played Avenel, fled to Argentina for five years); while director Paul Riche in 1949 became the only French filmmaker to be executed after the war, although for his collaborationist journalism rather than this film. Technically the film is a thoroughly professional job, with a jaunty score by Jean Martinon and photography of the calibre one would expect of Marcel Lucien, Jean Renoir’s cameraman on ‘Boudu Sauvé des Eaux’.
3 out of 5 found. @Richard Chatten