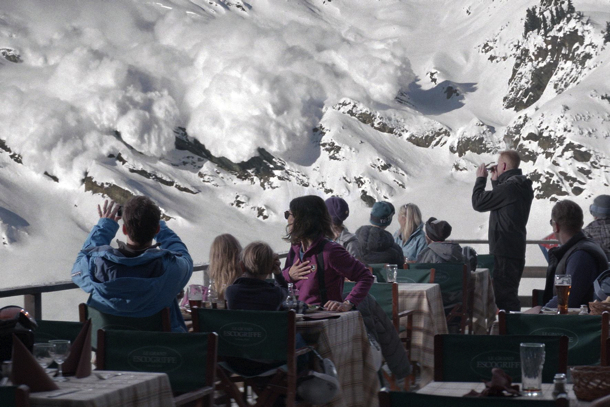 The working title for Ruben Östlund”s avalanche drama was originally Tourist but FORCE MAJEURE injects a more sinister and bewildering feeling into this cold-hearted psychological thriller that follows in the wake of an ‘act of God’. Tomas (Johannes Kuhnke) is a family man on a skiing holiday with his wife and kids who puts his own safety before that of his vulnerable family when disaster strikes.

But luck saves the day (or fate, in his case) and once the threatening snow cloud has transformed into a harmless puff of ice, Tomas goes back to eat humble pie (or Baked Alaska?) having blown his marriage and betrayed his children. His ego gets in the way and he can’t admit his cowardice, even when good judgement prevails.

Ruben Östlund is a pastmaster of the moral drama. His previous film Play concerned a group of black immigrants who mugged some white kids while the disaffected adults looked on, afraid to report the crime lest being accused of racism. Here, Tomas puts his safety first, albeit in the heat of the moment. But this behaviour is not unusual in the scheme of things: Many men put their businesses or their own interests before those of their wives and families – it’s a natural human response want to safeguard the ability to provide. They end up losing their marriages and often their liveliehoods as a result – Ostlund has cleverly transposed this situation into an exciting and tense tragedy reaping dramatic rewards – but the family survive. Wives can often get over cowardice, if they feel their husband’s remorse. Here, Tomas’s wife Ebba (Lisa Loven Kongsli), could forgive if only Tomas could admit his human failing, but his pride stands in the way. Tomas is caught between the avalanche of his male ego and that is what rampantly ends up destroying all he holds dear.

Fredrik Wenzel and Fred Arne Wergeland capture the magnificent natural landscape, both beautiful and hostile – showing the mountains as a fabulous natural force of nature and a dangerous, untamed wilderness, much the same as ‘male’ at its core. In Force Majeure, the real terror starts after nature has calmed down. Kristofer Hivju puts in a brave attempt to stick up for his friend but this all feels disingenuous in the scheme of things. It’s an uncomfortable film that forces us to contemplate our own behaviour. The children (newcomers Clara and Vincent Wettergren) watch silently as the family implodes. No justification can wash away this avalanche of guilt, no matter how strong the sun shines in the aftermath. MT

NOW ON BFI PLAYER | FORCE MAJEURE won the Jury Prize at UN CERTAIN REGARD in 2014 | REVIEWED AT CANNES FILM FESTIVAL 2014.