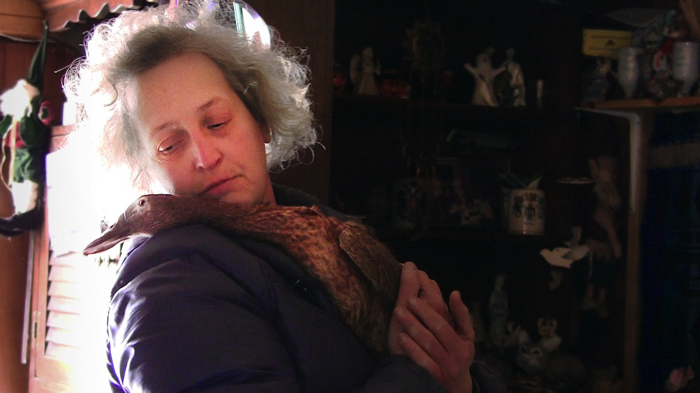 Over five years in the making, Richard Miron’s debut documentary is an astonishing portrait of a very special kind of hoarder: Kathy Murphy’s love for her feathered friends started with a helping hand to a baby duckling ten years ago –  now over 200 ducks, chicken, geese and turkeys invade the family’s mobile home in Warwasing, up-state New York.

No wonder husband Gary feels upstaged by the animals: “With her, you don’t seem to get anywhere”, he confesses to the filmmaker. And while Kathy feels a unique closeness to the feathered members of her family, it soon becomes clear that she uses them as a barricade between herself and Gary: “He knows I’m attached to them, but not just how much I’m really attached to them. I would die for them”.

Things boil over when her case is referred to the Woodstock Farm Animal Society, where manager Sheila Hyslop shares Kathy’s love for animals and tries to keep an amicable relationship going. That is not always easy, since Kathy’s “feathered children” are not only destroying the couple’s home, but also their marriage. Gary plays Bob Dylan blaring through the night, to get to sleep, before the start of an early shift.

To save the animals, Nicole and Ted, two volunteers of the Bird Sanctuary, have to trick Kathy into letting some of her “children” go. But success is limited, and finally we get a court trial. Gary is caught in the middle: he teams up with the Sanctuary’s team, which makes him a traitor in Kathy’s eyes. Her lawyer, William Brenner, a tax attorney, fits in well: he has an office, which resembles Kathy’s home – minus the animals.

Eventually tragedy will reconcile Kathy with her daughter and grandchild – and some money to make a new start. The more we learn about her, the more we realise how Kathy uses the birds to block off the rest of her life, affecting her mental health. Her ability to connect with the animals is part of a deep-seated emotional fear of humans – and it takes a long time to save Kathy and the birds.

Miron tries to avoid a deeper context, and stays focused on Kathy. His intimate portrait illustrates how the animals are just vehicles for her to postpone a mental breakdown.

Miron’s cinema vérité style is enlivened by old photos and Super Eight family films, which show Kathy emotionally well-connected with her family. And even at the end, the audience has no idea what drove her to isolate herself from humankind. A very sensitive and emphatic case study AS