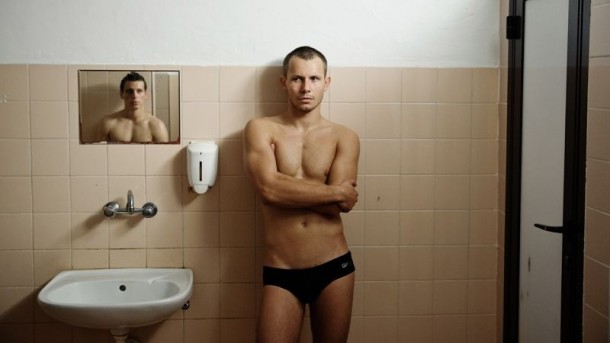 Last year’s Kinoteka revealed a sparkling array of erotically-charged films from the new wave of Polish filmmakers. In this follow up to In The Bedroom, Thomas Wasilewski  offers us another affecting drama. Expertly-filmed and well-written it also stars In The Bedroom’s Katarzyna Herman.

The central character in Floating Skyscrapers has a dilemma: is he heterosexual, gay or just a highly-sexed bi?  Played with emotional and physical gusto by Mateusz Banasiuk, Kuba is a professional swimmer whose honed physique and competitive-edge belies his shaky sexual identity.

Living with his mother, Ewa (Katarzyna Herman) and girlfriend Sylwia (Marta Nieradkiewicz), makes matters worse as the two women compete for his attention when he is not poolside. It’s clear that his sporting prowess does little to curb his sexual appetite which is further stimulated by the athletic bodies of his fellow swimmers until he’s drawn to  the charismatic Michal (Bartosz Gelner) who he meets one evening with Ewa. The men’s attraction becomes palpable during unspoken gestures and eye-contact during dinner and Ewa picks up on this. Ewa is dismayed the two have met not least because her sexual relationship  with Kuba is adversely affected as the unresolved tension in Kuba slowly becomes apparent.

Gelner and  Banasiuk give utterly convincing performances as they gradually become closer, beautifully filmed by cinematographer Kuba Kijowski in neutral tones of  silvery beige and acqua echoing the water motif.  A judicious use of silence  accentuates the tension throughout.  Michal is an interesting character, appearing more urbane and sensitive as a counterpoint to Kuba’s tough macho quality that gradually melts away as the narrative unfolds. Katarzyna Herman’s turn as Ewa evokes a subtle and deep-understanding of her son. Thomas Wasilewski is a promising filmmaker and storyteller with an excellent vision for both creative widescreen visuals and for detailed camerawork marking him out as an exciting talent in modern Polish cinema.  MT

FLOATING SKYSCRAPERS IS ON GENERAL RELEASE FROM 6TH DECEMBER.  READ ALEX BARRETT’S INTERVIEW WITH THE DIRECTOR.