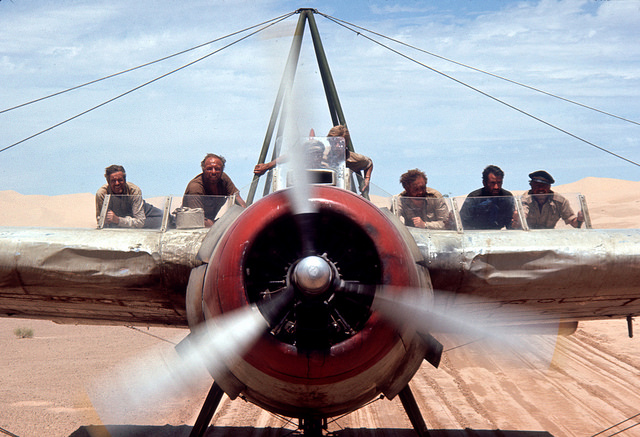 Robert Aldrich (1918-1983) was an underrated mainstream director in Hollywood, mostly remembered for the original Dirty Dozen feature and the horror schlock What ever happened to Baby Jane. But his credits include such cult films as Kiss Me Deadly and The Killing of Sister George. Flight of the Phoenix was written by Lukas Heller, who worked regularly with Aldrich, and delivered scripts with psychological insight, and less action-centred structures.

A cargo plane, piloted by Frank Towns (Stewart), crashes in the Sahara desert due to the pilot’s error, but eleven men survive. Towns’ guilt makes him clash regularly with the German engineer Dorfmann (Kruger), who eventually proposes to build a new plane, since the survivors only have water rations for less than two weeks. Lew Parson is the pacifier (Attenborough)  trying to calm to the two alpha males down. Capt. Harris (Finch) never forgets his military rank and causes more strife with his arguments, trying to re-create a military unit. But after he and Dr. Renaud (Marquand) are murdered by native raiders, the project of rebuilding the plane makes progress, until Towns and Parson discover that Dorfmann has never designed anything apart from model airplanes. But both men keep quiet, and hope that Dorfmann succeeds against all odds.

One would call this a chamber piece, if it weren’t for the setting: the desert is arguably the star of the film, the protagonists are dwarfed by the big country environment. DoP Joseph Biroc (Emperor of the North) lightens the scenes in the mood of the permanently changing sand dunes, creating near hallucination: these images of a dream world affect both protagonists and audience. The struggle for control by the main antagonists is a clear manifestation of their suicidal tendencies, since their fights reduce the survival chances of everybody. Aldrich shows the lack of male cooperation, which is based on a lack of trust – but the mistrust is just a projection of their own insecurity, and guilt, particularly in Towns’ case. Somehow Aldrich leaves it up to us whether the men deserve to survive.

The main drawback is the running time of nearly two and half hours: the multiple conflicts are simply too repetitive to keep the audience interested for such a long time span. The lengthy psycho-drama feels like a – rightful – rejection of main stream action movies, but also comes over as a case study, which the director draws out into an often self-indulgent project, too often hampered by semi-philosophical meanderings. (Having said this, the 2004 remake was a complete failure). AS