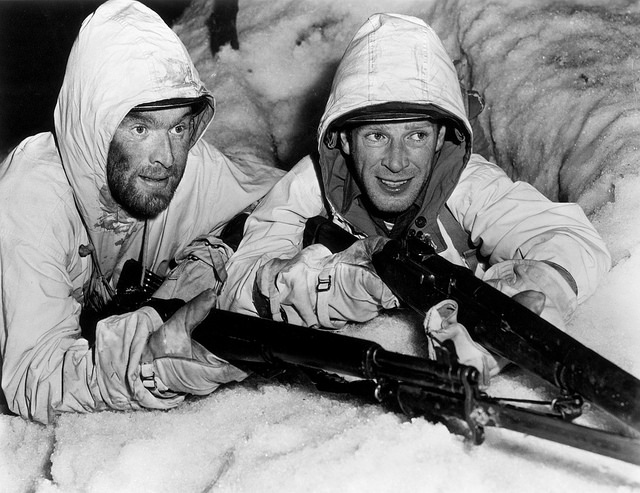 There is a shot of Samuel Fuller on set, cigar in one hand, raised automatic pistol in the other; it looks like he’s going to fire his pistol, instead of shouting “Action!”. The photo could have been taken on the set of FIXED BAYONETS!. Whilst a real war was raging in Korea with losses on the American side mounting, 1951 saw Fuller shooting a combat film about the war, in a studio covered in snow.

Fuller saw active service during the Second World War and he later wrote: “My yarn included stuff I’d lived through on the front lines; such as the risk of frostbite in freezing weather; an officer’s misgivings about having to order his men into danger and a soldier’s fear about pulling the trigger. ‘You take care of her’, says one of my characters, looking at his M1, ‘and she’ll take care of you’. I’d heard my sergeant say that again and again. There is nothing romantic about the infantry. If you survive, you’ll be proud of having been a foot soldier, until the day you die”.

As it turned out, the army showed FIXED BAYONETS! in their training schools. ThE unwilling hero is Corporal Denno (Basehart), part of a company of 48 men – pretending to be the whole division – so that the rest can retreat in safety. Denno is not too keen on killing, but when all his superiors are killed he has to reluctantly take over the command of his unit. Fuller again: “I know there is nothing dirtier than rear-guard action, but in his case it’s 48 men – unlucky men, maybe –giving 15000 men a break. The 48 men must use their ingenuity to pretend to be a much larger force, in order to buy needed time”.

This does not sound a heroic story, and even though the soldiers call the enemy “Reds” and “Commies”, they are never caricatured or demonised. Very much in the style of Steel Helmet an independent production of the same year which got Fuller the contract at Fox (“Zanuck being the only mogul who was not interested in money”), FIXED BAYONETS! tells the little stories which go to make up the film: such as Denno being told by Sergeant Rock (Evans) “You are not aiming at a man. You are aiming at an enemy, once you are over that hump, you are an infantry man”. The scene where a man is rescued from a minefield is both suspenseful and ironic – Fuller never let’s the audience forget the sheer terror of war.

Shot on a single set, a mountain covered in snow, Lucien Ballard’s black-and-white photography is stunningly evocative, particularly the crane shots which are not –as often happens – used for effect, but to keep the focus on the terror to survive. In a small, non-credited role, we catch the first glimpse of a certain James Dean. AS

NOW OUT ON DUAL FORMAT COURTESY OF EUREKA MASTERS OF CINEMA