Austrian cinema comes in all shapes and sizes from arthouse to mainstream, documentaries and features covering all the genres, and the success continues

2014 was a stellar year setting a new record for Austrian Film in all the main international festivals: Cannes, Berlin, Venice, Sundance and Toronto showed award-winning titles for Ulrich Seidl (Paradise:Faith); Jessica Hausner (Amour Fou); Hubert Sauper (We Come As Friends); Sudabeh Mortezei (Macondo); Veronika Franz and Severin Fiala (Goodnight Mommy) amongst others. 2015 is still coming up trumps although there will be no outings from Michael Haneke and Ulrich Seidl, the best known boys on the Austrian block.

The Austrians are very good at taking ordinary life and turning into horror at Venice this year. In the same vein as Michael Haneke’s FUNNY GAMES (1997), Ulrich Seidl’s (Im Keller) wife and collaborator, Veronika Franz, makes her debut with a vicious and expertly-crafted arthouse piece, set in a slick modern house buried in the Austrian countryside.

In the heat of summer, nine-year-old Elias is enjoying the school hols with his twin brother Lukas. They appear normal boys: swimming, exploring the woods, and keeping giant cockroaches as pets. But in the pristine lakeside home, their TV exec mother has made some draconian changes. Recovering from facial surgery and bandaged up literally like a ‘mummy’, she has banned all friends from visiting the house while her recuperation takes place in total privacy. Nothing wrong with that, but the boys misinterpret her behaviour as a sinister sign and start to wonder whether this is really their mother. The more they question her for re-assurance, the more fractious and distant she becomes. Reacting against her instinctively, they become convinced that she is not their mother but a strange intruder, and decide to take control of the situation.

Franz and Fiala create an atmosphere of mounting suspense with clever editing, minimal dialogue and the use of innocent images that appear more sinister and unsettling when taken out of context. Martin Gschlacht’s cinematography switches between lush landscapes, sterile interiors and suggestive modern art to inculcate a sense of bewilderment and unease. Susanne Wuest is perfectly cast as the icy, skeletal blond matriarch with menace and the innocent boys transformed into everyday low-level psychopaths due to the lack of early maternal love or support, bring to mind those creepy kids from The Innocents, or even Cronenburg’s The Brood. A very clever film which contrasts images of revulsion with those of serene beauty. MT 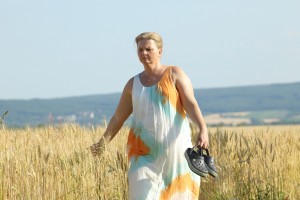 Best known for his performance in THE GRAND BUDAPEST HOTEL, Austrian actor turned writer-director Karl Markovics attempts poetic realism in his quirky second feature, a follow up to the award-winning drama BREATHING.

It has Ulrike Beimpold (The Wall) as a buxom blond suburban housewife who develops an unusual relationship with God. Wittily scripted and visually slick and inventive, SUPERWELT loses its momentum after an amusing and watchable start.

Gabi (Ulrike Beimpold) is happy in her work as a supermarket cashier and runs a tight household for her pot-bellied husband Hannes (Rainer Woss) and screen-based son Ronnie (Nikolai Gemel) in the leafy provincial town of Bruck, surrounded by golden cornfields and wind farms. But life is too good to be true and one day, out of nowhere, she is visited by an invisible and magical force, not similar to that in THE WALL, that rocks her ordinary world, sending her completely off balance emotionally and scampering into the fields, like the demented victim of some kind of religious fanaticism.

Beimpold is exultant as Gabi, her facial expression is off vacant gives a finely judged performance, her face vacant and anxious, but never overplaying Gabi’s beatific bafflement. A cartoonish chorus of minor characters, from intrusive neighbors to fainting Jehovah’s Witnesses, provide plenty of agreeable levity.
But Markovics proves more adept at setting up his divine dramatic puzzle than he does at resolving it. His script runs short on lucidity and momentum in its second half as Gabi wanders the sunlit Austrian landscape, increasingly angry with a Supreme Being she never summoned in the first place. Her spiritual epiphany ends up as a kind of extreme form of relationship therapy, exposing the hidden faultlines in her marriage. “How often have you been happy?” she asks Hannes bitterly. “How did we settle for so little?”
Markovics remains frustratingly opaque about the theological aspects of his story, and some may find the finale a fuzzy-headed anticlimax. All the same, SUPERWELT is consistently sweet and engaging, a warm-hearted celebration of minor earthly miracles as much as the more heavenly kind. MT 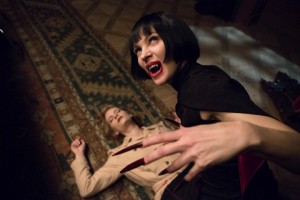 THERAPY FOR A VAMPIRE

Austrian auteur David Ruhm adds a stylish and witty contribution to the blood-bloated canon of the Vampire genre here with a Freudian-themed thirties pastiche THERAPY FOR A VAMPIRE.

In his Viennese consulting rooms in 1911, Dr Sigmund Freud (Karl Fischer) is conducting an early experiment using Art Therapy to explore his patients’ dreams. Naturally, given the title, one of his most illustrious patients is experiencing some challenging ‘issues’. Count Geza von Közsnöm (Tobias Moretti) is suffering from a generalised ennui: having lived for thousands of years, he’s simply tired of life and the sex with his wife, the strikingly sultry Gräffin Elsa (Jeanette Hain) has simply lost its bite. He is also haunted by the premature death, centuries earlier, of his true love, Nabila. When he sees a portrait of a woman painted by Viktor (Dominic Oley), Freud’s inhouse artist, he is struck by a mysterious ‘deja-vu’ between the subject of the painting, Lucy (Viktor’s girlfriend played by Cornelia Ivancan), and his own long lost lover.

Back in their bijoux castle in the wooded suburbs of Vienna, Count Geza enthuses over Viktor’s artistic skills to the emotionally needy and narcissistic Graffin Elsa, who is having serious problems with her image. Unable to see herself in a mirror, she implores Count to commission Viktor to paint her portrait.

Rühm has crafted two very appealing vampires here, who are not only stylish and drôle but also have lost none of their dark weirdness, in echoes of Tilda Swinton and Tom Hiddleston in Only Lovers Left Alive, although this is a far more stylised drama. Drinking blood from transfusions they are able to define the exact profile of their victims – young Virgin, aged Diabetic – and so on – without the inconvenience and mess of blood spurts and uncontrollable haemorrhaging on their beautifully hand-tailored attire. They are endowed with all the traditional Vampire capabilities of bestial transformation, they quail away from crosses, garlic and wooden stakes but they also embody the more playful attributes of irony and self-parody as seen in The Munsters. But it is their obsession with counting objects that is their final downfall.

Beautifully-crafted and sumptuously staged, the success of Rühm’s Gothic horror piece lies in this combination of sinister weirdness and seriously dark humour, and there are some unexpected quirky laugh out loud moments that make this really entertaining. And although it never fully explores the Freudian premise, it pays homage to the legendary therapist in its themes of unrequited love, vanity and sexual obsession. Performances are consistently good: the two female leads are far from pliant, adding a foxy feminist streak to their Gothic horror credentials. Viktor is sensitive and appealing and Count Geza sneeringly wicked and elegantly masculine. MT

THE LAST SUMMER OF THE RICH

Best known for his appearance in Rainer Werner Fassbinder’s Despair, Peter Kern came to Berlin this year with his cultish portrait of Austria’s sexually depraved yet privileged jet-set. Styled as a darkly humorous retro LGBT outing, it features nuns and high society louches lesbians, all dressed up in fetish rubberwear. Despite its low-budget credentials, Peter Roehsler’s stylish visuals transform this into a slick story that will leave you with resounding cultural echoes of a bygone era with its lingering echoes of Helmut Newton.

Amira Casar stars as Hanna von Stezewitz  high class intern-abusing financier by day and leatherette lounge-lizard by night. Initially reluctant to care for her Nazi grandfather (Heinz Trixner) she selfishly rises to the occasion when his carer turns out to be an attractive young nun Sarah (Nicole Gerdon) and an unlikely romance blossoms that softens Hanna’s vituperative sadism, although it is too late for redemption. Despite a clunky script and some tonal unevenness where Kern is unclear about whether he is making a caustic 70s satire or is genuinely buys into his Fassbinder-style narrative. THE LAST SUMMER OF THE RICH is a deliciously indulgent throwback to the soft porn decadence of the seventies. MT