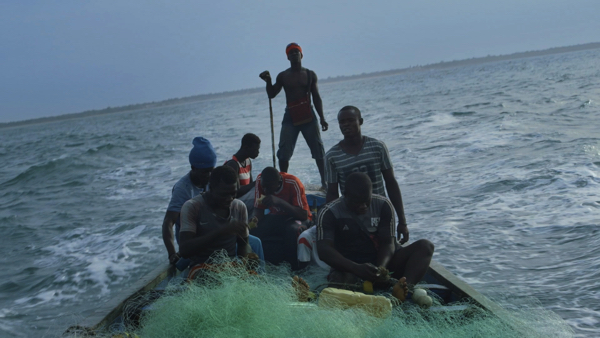 In the smallest country of continental Africa, Gambia, fish are now being caught and processed by Chinese corporations and exported to Europe and China to feed animals in industrial farming. As a result, Gambians are being deprived of their primary source of protein while overfishing is depleting marine ecosystems. The film follows three Gambians who share the sea’s bounty. Or they did up to now. Increasingly they are being forced into poverty due to overzealous fishing from Chinese boats that fail to respect the ecosystem. The Chinese have pumped finance into the country but this allows them to take the lion’s share of the fish for their factories, forcing prices up for the average Gambian because the fishermen who traditionally sold to the markets are now servicing the factories, of which there are now 50 in West Africa. Only when the factory quota is full, can the fisherman sell their catch to the locals who then sell to the markets.

The main habitat for marine fish is naturally the sea. But one young fisherman explains how the fish actually breed in the long inland Gambia River which flows throw this sliver of a country that benefits from a lengthy Atlantic seaboard, rather like Chile. The Chinese have found a way to bring their boats right up to the shallows, formally the exclusive domain of the local fisherman, capturing not only mature bonga, red snapper or catfish, but also the stock in their early stage of life with nets that also do not allow turtles, dolphins and other mammals to escape, a practice that is ecologically unsound for all marine creatures.

With a population of only 2 million Gambia has one of the highest rates of irregular migration towards Europe. But “taking the backway” or migration, is by no means an answer nowadays.  Many Gambians have drowned in the perilous crossing to Europe, or been captured by patrol boats and kidnapped by nefarious gangs or the police, and sent back before they reach the safety of the shores. So they must fight for survival eking out an existence with what’s left in the diminishing fish stocks in this narrative that very much reflects back on the global fishmeal industry and how it impacts on the lives of local people in one of the poorest areas of West Africa.

Gosia Juszczak films with an artist’s eye capturing the lush colours of this beautiful sea-faring country, surrounded by Senegal and often referred to as “The Smiling Coast” with its pleasant climate and contented people. MT