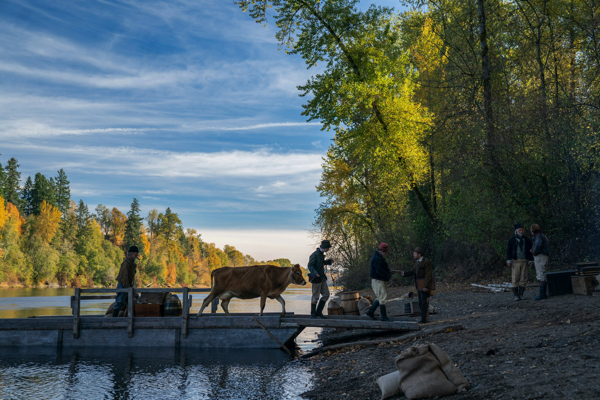 “The bird a nest, the spider a web, man friendship.” William Blake

Kelly Reichardt’s eighth film takes us back to the old West in a timeless and fabulously crafted story of two men finding friendship as they wander the sylvan landscapes of the 19th century Oregon Trail trying to survive off the land.

This lyrical and richly textured film lulls us with a hypnotic narrative that slowly catches fire in the final stretch. The mutually compatible souls come together from different corners of the earth. Bonded by their hopes and dreams they develop a miniaturist cottage industry: the Chinamen King Lu (Orion Lee) has the business acumen, the diffident American is Boston baker “Cookie” (aka Otis Figowitz, a sensitive John Magaro) and what emerges is a painterly rendering of Maslow’s hierarchy of needs: first there is hunger but gradually sophistication and greed come into play, as the smouldering story unfolds.

It all starts with the arrival of the first cow in the region, an amiable dairy heifer seen drifting gracefully along the river in a boat from San Luis Obispo. Once firmly on dry land she is encouraged by Cookie to provide the vital ingredient for his buttermilk buns. And these provide for the men’s needs in the short term. Lu suggests they sell them at the nearby market, and soon they have regular customers for their fare. Lu points out their “window” will not last for long. But before competitors catch on to their bakery bandwagon, something tragic happens.

And this comes with the arrival of the cow’s owner, Toby Jones’ Chief Factor, a wealthy English sea merchant who lives in a supposedly grand clapperboard house, with his Native American wife (Lily Gladstone). His observations on how to incentivise workers, and his sophisticated social commentary on London fashions spike this gentle story with a vein of subversive humour. We learn the buns have a subtle taste of “South Kensington” and that the ‘Empire Line’ is no longer in vogue, but canary yellow is the now the colour ‘du jour’ for ladies couture. Also that his humble cow is actually descended from the highly prized ‘Froment de Leon’ breed, crossed with Isigny in Brittany, ensuring exceptionally rich grass for grazing, hence the quality of its milk and cream. So when Factor visits the market to sample the famous buttermilk buns and orders a ‘blueberry clafoutis’, the penny starts to drop, but not into the baker’s hands.

Reichardt’s regular cinematographer Christopher Blauvelt creates painterly images that glow like Rembrandt Old Masters, enhanced by the use of the silent era’s 4:3 aspect ratio. The animal connection here is tender rather than sentimental, once again showcasing Reichardt’s relationship with animals: her well known dog Lucy has been cast in her films – notably Wendy and Lucy (2008), and Old Joy (2006) which share Reichardt’s regular writing partner, who also wrote the book on which this arthouse treasure is based: The Half Life. MT