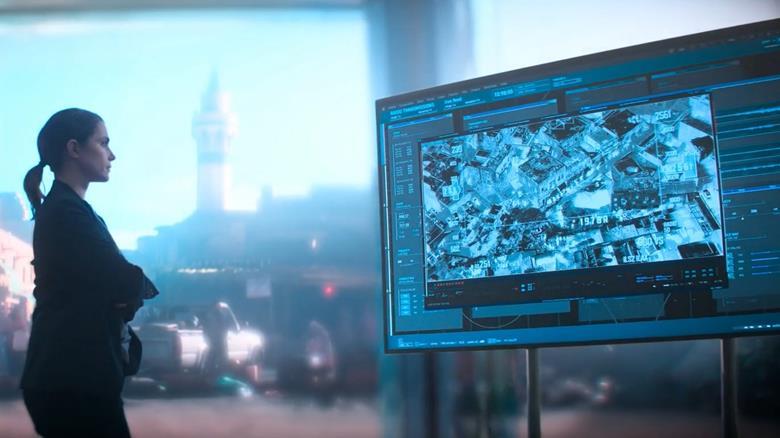 British filmmaker Paul Franklin, well known for his VHX work with Christopher Nolan, winner of two Oscars for Best Visual Effects (Inception/Interstellar), directs Paul Lally’s script about an operation at MI6, focusing on the frailty of human judgement in a situation of life and death.

Tension reigns in the MI 6 Ops room. In Tripoli, a well known terrorist will be executed. And to make matters worse, supervisor Gillian Lye (Riley) has fallen out with her father during a phone conversation. Co-workers B (Aminashaun) and Fiza (Chaar) try to keep out of it, when Pep (Jeremiah) enters the fray, telling Gillian that there are children in the vicinity of the drone attack. When Pep finally gets through to Gillian, who wants to abort the mission, boss Ellie Sherberg (Gough) arrives having just had a conversation with the government Minister and offering Gillian an opportunity she would be mad to refuse.

Originally planned a stage play by writer Paul Lally,  the project was developed by Franklin as an immersive experience for VR headset. Instead of visiting Lebanon, PD Jamie Lapsey used Russian language search engines, to find holiday shots to build the city in an “unreal” engine. Ed Thomas, VP Supervisor, explains the target was to build a real street section, with Franklin navigated the shoot with VR goggles to plan the shoot. Franklin was able to put a virtual movie camera (an IPad on a shoulder mount), walking around and looking at the virtual world, sharing it with Ollie Downey, the cinematographer who took individual frames from the VR recce to produce storyboards for the whole film.

“Dimensions Unreal’s” Craig Stiff did not only construct the virtual world, he also acted as gaffer. The treatment was the same, as if we had created the whole set on the street in Tripoli. Franklin:” I let the background over-impose, and treated it like a view from the window on a normal was set – only this way, I would have much more control”. The real and virtual sets were blended. The texture of the ground had seamlessly blend into the texture of the digital ground. Once you get this, it is very difficult to see, were reality ends and virtual reality begins. AS