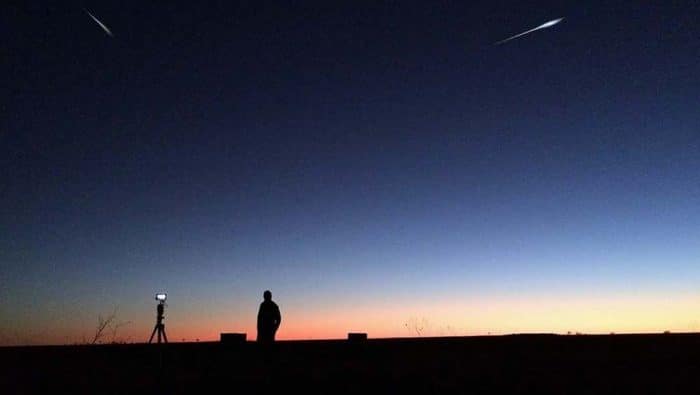 Close encounters of the cosmic kind are the focus of Werner Herzog’s latest documentary as he joins up again with volcanologist Clive Oppenheimer (Into the Inferno) for a peripatetic odyssey into the world of asteroids and meteorites that could fall to Earth and one day destroy us. Captured on the pristine camerawork of Herzog’s

collaborator Richard Blanchard, whose wizardry makes this all the more astounding.

Arcane and sometimes darkly amusing in its fervent boy’s own adventure style of cosmology – you wonder whether Ulrich Seidl has been involved – this is another of Herzog’s mammoth undertakings and the protagonists get very excited about their subject, often waxing lyrical – in the case of the ‘Brothers of the Stone’: “meteorites have a meaning and it’s up to us to interpret what this is”.

Werner Herzog is obviously deeply worried but remains chipper while communicating his concern about this planetary devastation through a series of eager talking heads compered by Oppenheimer himself. There is Bavarian four-times cancer surviver Jan Braly Kihle (straight out of Im Keller), Jon Larsen, a Norwegian violinist with a penchant for cosmic dust (“Cosmic dust looks eternity in the eye, it is the oldest thing that exists on earth”); Brother Guy Consolmagno, a jolly Jesuit astronomer who heads up the Vatican Observatory; and Paul Steinhardt an expert in natural ‘quasicrystal’ whose field experience had hitherto not extended beyond the lawns of Princeton University but he bravely undertakes to locate and prove these crystals had actually been formed in space.

But the principle concern of Fireball is the exploration of things that fall from space, and the myriad artistic rituals and myths associated with these “visitors from darker worlds”. In tones that can only be described as conspiratorial and febrile, Herzog delivers a killer statement: “We do not know what in the future is coming at us, eventually destroying us” but “untold numbers are still on their way.”

Although Fireball may at first seem rather glib and ridiculous the film soon takes on a more contemplative vibe laced with moments of sheer joy and wonder – visually speaking. We visit no fewer than 17 of the planet’s most remote  geographic corners, not to mention university laboratories and  government facilities. In Mecca we experience the religious fervour when pilgrims are able to touch the famous Black Stone in the Kaaba (here Herzog relies on footage from ‘a believer’). In Mexico (where people believe that shooting stars transport the souls of the departed) we join a Mayan ceremonial procession featuring a fireball on the famous Day of the Dead. But most impressive of all are the sites where asteroids have actually wreaked palpable damage. An enormous crater in Australia has inspired local native aboriginal artist Katie Darkie to create some highly colourful paintings. And according to local folklore another 300 asteroid purportedly fell on a field in Alsace back in 1492. But the most extraordinary comes later.

Occasionally even Oppenheimer seems fazed by the boyish enthusiam of the experts, especially one who hands him a meteorite called ‘The Dog House’ that apparently fell on a dog’s kennel in Costa Rica (luckily the dog lived to bark again). Apparently heavier meteorites landed in the same region the ground underneath was totally destroyed and turned to glass: “if you were sitting there having a cup of tea, you would undoubtedly be turned to glass” he reflects joyfully. Elsewhere in the same Arizona facility, Oppenheimer gets rather flirty when he meets a highly attractive female meteor expert who giggles excitedly when he points out that some of the samples look like the work of Barbara Hepworth. “We’re all stardust – eventually”; she retorts, and at this point Herzog cannot help joining in the cheeky banter.

In a crater in Rajasthan – near to 11th century Hindu Temples — geochemist Nita Sahai comments that meteorites actually contain protein. “What do you think of Panspermia?” asks Oppenheimer rather sheepishly. Nita answers gamely that Shiva is a god of both creation and destruction in the Hindu religion.

Narrating, Herzog judiciously keeps a firm control on pacing, cutting away from experts who are getting over-excited. From India we move to Chicxulub Puerto on the Yucatan Peninsula, where the most cataclysmic asteroid hit ever occurred over 66 million years ago leaving a hole 30 kilometres deep. Although dinosaurs were destroyed in the event, mammals made it through the catastrophe and were able to regroup – although the crater was not discovered until the 70s.

What is certain is that “a big one is going to hit us fairly soon”. That’s the view of a couple of scientists in Maui who have got it covered when it comes to watching out for these ‘unwelcome visitors’, using telescopes equipped with the world’s largest digital cameras. Luckily NASA is also active in this regard with their Planetary Defence Coordination Office responsible for letting us all known when the moment of doom finally arrives.

Fireball includes footage from recent feature films picturing the arrival of unwelcome celestial visitors and a final sequence that sees Herzog back on top form as a master documentarian in a film that needs to be seen to be believed. MT