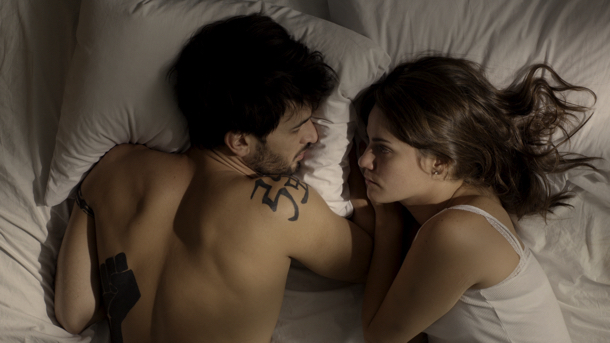 Juan Schnitman’s promising debut explores the mounting tension of a dynamite day in the lives of a  young Buenos Aires couple as they prepare to complete the purchase of their new home.

Lucia (Pilar Gamboa) and her partner Marcelo (Juan Barberini) have a sparky relationship, to say the least. But things turn even feistier as they prepare to take the important step of becoming property owners in the Argentinian capital. In a quiet moment as face the day, they realise that this is also an important moment in their relationship. But their morning reverie quickly erupts into a loving tussle that turns into fight as tension mounts in preparation to take their hard earned cash to a man called Paglieri. As it turns out their anticipation is for nothing as the date is delayed; fraying their nerves even further.

Gamboa and Barberini give superb performances as a couple whose emotions are never far from the surface. Whether this is due to their unique chemistry or issues that have unwittingly come to the fore from their past experiences and childhood, is never properly explored although clearly both have emotional issues. Lucia has a better background than Marcelo does, and the heavily tattooed macho male is well aware of this but why he keeps a gun concealed is questionable. During her tearful therapy session, Lucia admits to “drifting away from her family” and even feeling Marcelo hates her.

Later we witness a febrile exchange between Marcelo and a local mother who accuses him of abusing a pupil in the school where he works; but again this thread is sadly not developed serving as another symptom of the histrionic tensions that resonate throughout a drama that fails to gives its audience a break from the high octane tone to re-group. Despite committed performances from the couple, this and a weak script are really the main pitfalls of Schnitman’s tensile debut. And although there are some powerful moments particularly in the final scenes, the pair and their insurmountable problems are a little too overwrought to make this feel enjoyable or worth the trouble. MT