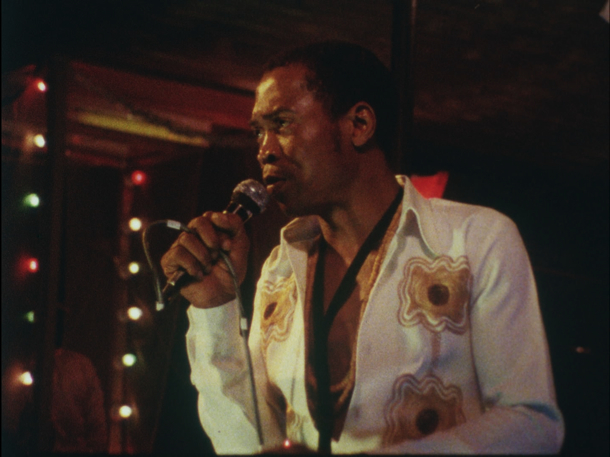 Well-known, prolific documentary-maker Alex Gibney has recently given us Mea Maxima Culpa; Julian Assange in Wikileaks: We Steal Secrets and Lance Armstrong (The Armstrong Lie). This time he turns his camera on the Nigerian political activist and prolific musician, Fela Anikulapo Kuti.

Born into a Nigeria’s elite in a wealthy and educated family in 1938, the enigmatic and colourful Kuti and his feared band, the Koola Lobitos, dominate the music scene in Nigeria in the 1970s and 80s with his self-styled ‘Afrobeat’ – music: a mélange of jazz, soul and funk beats, the best known of which is the album “Zombie”. Gibney scrabbles around piecing together patchy footage of this maverick music-maker, flitting between his political life and ‘art’. Often tuneless and meandering on for hours, the musical tracks and performances of this trance-like genre never really reach a climax yet somehow these rhythmic vibes lead listeners to the mysterious, exotic heart of deepest, darkest Africa conjuring up a world largely unknown to audiences in the sixties and seventies.

Gibney’s film takes on this meandering style, sprawling through the life of the man he calls ‘a visionary’ but also who appears sinister and dark.  Told alongside excerpts from New York choreographer Bill T Jones’s lively Broadway musical ‘Fela!’, which offers much information about his band’s dance methods and style, Gibney fills in the gaps with archive footage and interviews (from Paul McCartney) which are more formal in nature, telling of his family background in Lagos (where he learnt to play classical piano) and subsequent performances at his ‘Shrine’ club in the capital, although there is scant information on his musical influences apart from a cursory mention of ‘Jay Z’ .

What emerges is a mercurial personality who seems rebellious and provocative by nature, highly duplicitous yet rather traditional; peddling an anti-establishment populist agenda for human rights in his country yet at the same time cutting a large swathe through Lagos’s nubile scene and marrying 27 women in one ceremony, behind the back of the woman he was already happily married to at the time (and father to her children).  Yet women had a benign influence over him from early on: his strong mother (an feminist lawyer whom he worshipped) and his long-term lover Sandra Izsadore, an African-American Black Power campaigner, give interviews and seem to be articulate and highly appealing individuals. His academics brothers trained as doctors and seem very calm and serious. Gibney compares him to Bob Marley, but there is little of Bob Marley’s charm, infectious charisma and musical legacy to this figure, whose music seems largely unknown in the West for obvious reasons that will emerge: coming away you feel unengaged and slightly bemused in contrast to the positively uplifting experience of Marley (2013).

More than anything, Fela Kuti comes across as a confrontational figure who used music as a ‘weapon’ against the Government who reacted to him aggressively with frequent episodes of police harassment and violence – one of which left his 82-year-old mother fatally injured and many of his family members and acolytes hospitalised. After a brief exile in Ghana, he formed his own party “Movement of the People” he fail to gain election. Often arrested by Nigeria’s corrupt military government, he chose to remain in his native country. Dabbling in traditional ‘witchcraft’ and other arcane practices he later developed AIDS, dying in 1977. His funeral was attended by 1 million Nigerians. MT