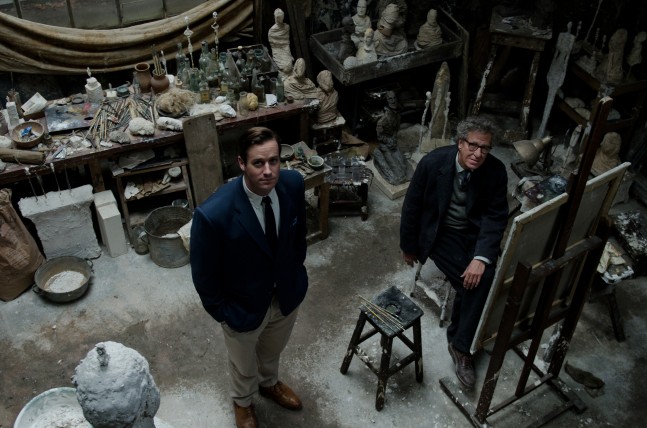 The sculptor Alberto Giacometti was an eccentric, philandering neurotic and a crashingly self-centred bore. He was also a perfectionist, a sharp businessman and a fool for love. Or so Stanley Tucci would have us believe in his rather idolatrous but witty biopic drama that follows the Swiss Italian artist in his Paris atelier during the 1960s, where he worked with his tolerant brother Diego, also an artist.

In his second feature as both writer and director, Stanley Tucci deftly dovetails themes of creative insecurity and narcissism as he delves inside the intriguing subject of what is it to be an artist. Basing his script on James Lord’s biography ‘A Giacometti Portrait’, Tucci conjures up a chaotic genius who process involves constant over-painting directly on the canvas before finally getting the measure of his subject many hours if not weeks after the initial sitting.

In 1964. shortly before his death, Giacometti’s work was fetching record prices forcing him to squirrel away wads of banknotes in his shambolic studio amongst the many works in process. His wife Annette – who he calls a “petite bourgeoise” – is dismayed by his ongoing affair with his ditzy muse Caroline, not least because he lavishes money on his lover while being tight-fisted with his spouse.

One day, Giacometti asks New York art critic and writer James Lord to pose for him. Initially flattered, Lord has no idea of what he is letting himself in for as the portrait, scheduled to take a week, stretches on for much longer amid constant interruptions for restaurants breaks, setbacks and altercations with his wife and lover. Armie Hammer is perfect for the role of Lord: open-faced, cheerful and uncomplicated he plays the long-suffering Lord, with consummate ease.

Genius Giacometti’s method of working flies in the face of other famous portrait painters who are highly organised, fast-working and diligent, often juggling several projects at a time, beginning with pencil sketching and photographic impressions before finally putting paint to canvas. This depicts a man who was disorganised, scatty and unable to work to deadlines, despite his obvious talent.

With a tour de force performance from Geoffrey Rush in the lead role, and Clemence Poesie perfectly irritating as Caroline, this is a stylishly imagined and richly photographed drama that captures the romantic magic of Paris in its Sixties heyday, but is rather denigrates the memory of Giacometti. Worth watching if you can cut it some artistic slack. MT