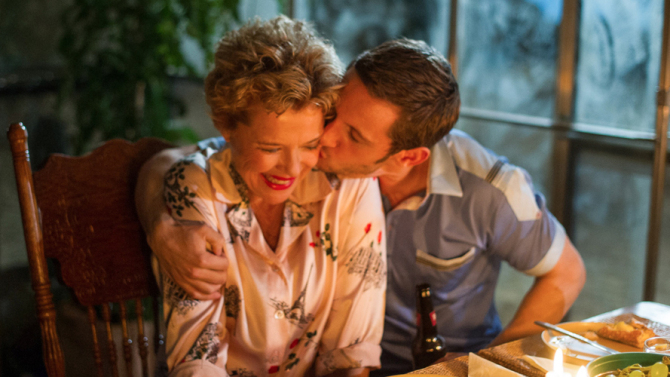 Redeemed by the brilliance of leads Annette Bening and Jamie Bell, this rather sentimental psycho-drama recalls Peter Turner’s memoirs about his relationship with Hollywood star Gloria Grahame (1923-1981). Opting for a tricky flashback narrative, director Paul McGuigan introduces the doomed lovers in late 1970s London where Grahame (Bening) is trying to re-establish her career on the London stage; while Turner (Bell) is ‘resting’ in Primrose Hill. Returning to the US, Grahame discovers that her low-level cancer has come back with a vengeance but she is very much in denial, and rejects chemotherapy for fear of losing her hair, and her acting career. She comes back to live with Turner in the home her shares with his parents  (Julie Walters and Kenneth Graham), Ironically, he is playing the part of an doctor while Grahame is dying, but still hopes to play ‘Juliet’.

Gloria Grahame emerges as a complex character, obsessed with cosmetic surgery in a bid to achieve absolute beauty. Her relationships ended mostly tragically: the marriage to director Nicholas Ray (1948-1952) ended in divorce on account of her infidelity with his 13 year son Anthony, whom Grahame later married later in 1960 causing widespread scandal. But Turner was anything but straight: in the film he mentions his bi-sexuality en-passant, but script-writer Matt Greenhaigh decides not to follow this up. There is a telling scene in California, when Gloria’s mother Jeanne McDougall (Redgrave) reminds her daughter poignantly about her predilection for younger men. And there is no mention of how Grahame got to know the Turner family, in the first place.

Polish born DoP Urszula Pontikos uses soft colours, avoiding the usual kitchen sink grime in Liverpool. There are not many laughs, but when the couple pay 90 pennies for two pints, laughter erupted in the cinema. Overall, Bening and Bell play their hearts out, and really convince us of their amour-fou. Like a late Bruckner symphony, they carry their filmstars beyond the realm of everlasting torture and loss. AS