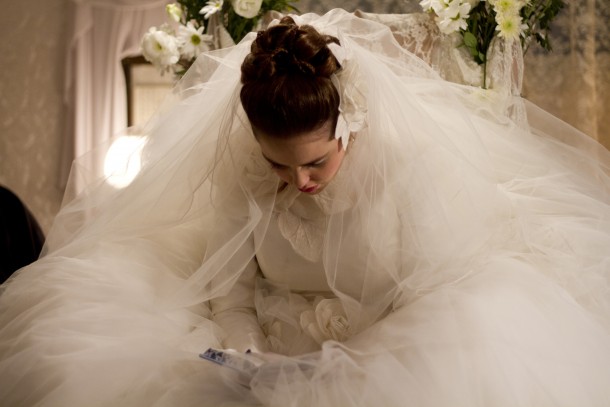 Giving an insight to a different world that still exists in contemporary society, Fill the Void is set in the orthodox Hassidic community in Tel Aviv.  This very religious sect has its own rules which its members stick to rigorously without complaining.

This is director Rama Burstein’s first feature film – which she has also written – and she has direct experience of this world, living as she does, within the ultra-orthodox community.  This appealing film has a good story, told without any great histrionics.  Through the eyes of young Shira we begin to understand something of the pull between the religious rites and needs of the family and doing right by both as opposed to the tug of the young woman’s heart which moves her towards romance and the lure of marriage to a young man.

Feminists might well balk at the idea that marriages are arranged and that women have no right to choose who they marry, but Burstein tries to show that adherence to a family’s moral compass is also worth a great deal and perhaps family comes before personal choice.  She tells how 18 year-old Shira (Hadas Yaron) has been promised in marriage to a young man her own age, who, although virtually unknown to her, nevertheless meets with her approval. She looks forward to her wedding once details of the marriage contract have been finalised.  Suddenly her beloved older sister Esther (Renana Raz) dies in childbirth and the whole family is overcome with grief.  Shira’s match is put on hold while the family mourns their loss.  Then they learn that Yochay (Yiftach Kelin), Esther’s husband, has been approached to marry a Belgian widow.  He believes he needs a wife to care for his new baby son. Shira’s mother, Rivka (Irit Sheleg) however, is desperate for the baby to remain in Israel and proposes that Shira marries Yochay, although he is a lot older.  Shira must now choose her future

The acting throughout is delicate and evoking real passion between husband and wife Yochay and Esther and later some smoldering emotion between Yochay and Shira. Humour comes out in the opening scene where Shira and her mother walk around a supermarket trying to identify the young man who is lined up for Shira. The film is well photographed with good use made of the lighting to view the characters, often through gauze, and the all the scenes take place within the home except a couple of short ones inside a synagogue and on the street. CARLIE NEWMAN

FILL THE VOID won Best Actress for Hadas Yaron Venice 2012 and was hown recently at the UK Jewish Film festival. It is on release from 13 December nationwide