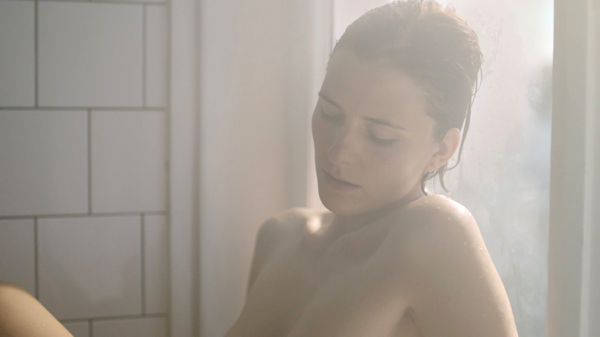 They say sex – or the lack of it – is the barometer of a healthy relationship. And Lena is not getting anywhere with her actor husband Stergey despite her best efforts to cajole him into some action between the sheets – and this is a drama that doesn’t hold back on scenes of an explicit sexual nature – despite its endorsement from the Russian authorities announced as the opening credits role. Russia has always been keep to promote (same sex) marriage, and actively encourages procreation – so the sexual taboo is clearly out of the bag now and this ratification is as an intriguing and welcome prelude to what follows in this raunchy affair.

Obviously Lena suspects Sergey (Pal) of having an affair, particularly when she notices a palpable chemistry with one of his fellow actors, but she decides to keep her own counsel – and Evgeniya Gromova gives a teasingly guarded performance in the lead, but one that gradually builds to a head of steam. The lack of sexual attention from her husband eventually drives her to a series of one night stands in an effort to satisfy her pent up natural urges in the summer heat.

Comparisons with Steve McQueen’s Shame are ill-founded: Lena is not an avoidant, not is she a nymphomaniac – she is just driven to distraction by her husband’s lack of interest in her. Gromova’s performance makes it amply clear that she still loves Sergey and would prefer to have sex with him rather than the muscled lifeguard who pays for a room in a local hotel, an tepid encounter that leaves her amused and ambivalent. But when she meets Ivan beachside, things heat up. Is it his top of the range 4X4 that attracts her? The two enjoy a lusty encounter before the Police arrive and Ivan scarpers along the dunes.

Writing again with Lyubov Mulmenk (Name Me was their feature debut in 2014) Fidelity at times has the feel of a Russian-style telenovela but it is a courageous and sensitively thought out for the most part, with some convincing characterisations as well as some more cartoonish figures – Ivan is a case in point and is clearly just there to serve the rather snaky plot which eventually sees these saucy scenarios jeopardising Lena’s job at a plush private clinic in a western Russian coastal town. And the film does shed light on a woman’s point of view – and should be celebrated as such. Lena is not immoral, she is just forced to breaking point, and that happens to women as well as men. Although, as surveys keep telling us: Women only tend to cheat when they are being ignored and by inattentive partners. Just saving. The film has its international premiere here in Rotterdam Festival.