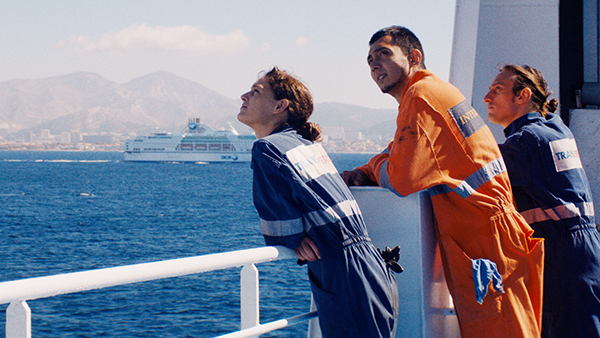 A female engineer on a container vessel manages to have a man ‘in every port’ in this drama that navigates emotional, sexual and romantic waters on the high seas.

Fidelio: Alice’s Journey (Fidelio: L’odyssee d’Alice), is an absorbing and gripping drama that won Ariane Labed Best Actress at Locarno Film Festival 2014 for her characterful performance in the lead and at the helm of the ship. It’s also the feature debut of writer director Lucie Borleteau who manages to enfuse the masculine world of international shipping with female sensuality and a certain finesse.

There is never a dull moment on board the good ship Fidelio, once known as the Eclipse when Alice (Labed) first sailed on her, below decks. After a lusty scene on a beach with her land-based lover Felix (Anders Danielsen Lie), Alice discovers, when she re-joins the ship to replace the deceased Patrick, that her old sea-going flame Gael (Melvil Poupard) is the new Captain of her heart – literally and sexually. The two go on to enjoy a great physical and working relationship – and Labed injects her ‘all’ convincingly into both roles: personal and professionally. Meanwhile, back on shore, she re-discovers the delights of her Norwegian dalliance who admits that her long absences at sea keep the winds blowing pleasurably through their relationship sails.

Borleteau’s script – co-written with Clara Bourreau – goes full steam ahead at first and avoids over-working tedious ‘woman in a man’s world’ tropes by keeping things engaging and authentic as Alice enjoys the best of both worlds in this cut and thrust male environment of the French merchant navy; where the ship’s destination can change daily depending on commodity market movements back home. But the narrative becomes rather becalmed in the third act where Alice and Felix’s affair enters stormy seas – although this is less of a problem by this stage as the focus is on the journey ahead  and Simon Beaufils’ magnetic cinematography broadens the appeal, both on the widescreen and in intimate close-ups on board the Fidelio. MT

ON GENERAL RELEASE FROM 3 OCTOBER IN SELECTED CINEMAS