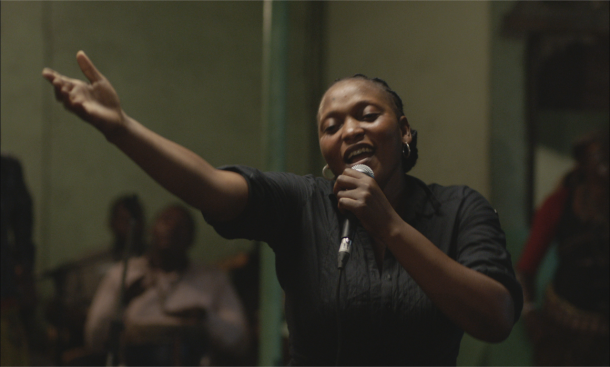 Senegalese Auteur Alain Gomis is best remember for Today his striking portrait of a man’s final hours in Dakar. Félicité is another resonant snapshot of a proud and independent woman that gradually opens its focus from an individual to an entire society in the Democratic Republic of the Congo.

Félicité (Vero Tschanda) works as a singer in a bar in Kinshasa. Singing is her therapy but also the joy she brings her audiences who are seduced by the rhythm of her music and her powerful, melancholy melodies. When Félicité’s son has a terrible accident, she desperately tries to raise the money needed for his operation, heading off on a breakneck tour through the backstreets to the wealthier districts of the Congolese capital. Her friend Tabu offers to help Félicité but she is not keen on the idea due to his often erratic behavioir. Reluctantly, she accepts and Tabu turns out to be the saving of her son’s rehabilitation. has a hard time picking up his old life, but it is lady’s man Tabu of all people who manages to coax him out of his shell. Félicité’s seedy flat then becomes the setting for this well-crafted drama with its plucky central performance by Tschanda.

NOW ON GENERAL RELEASE FROM 10 NOVEMBER 2017