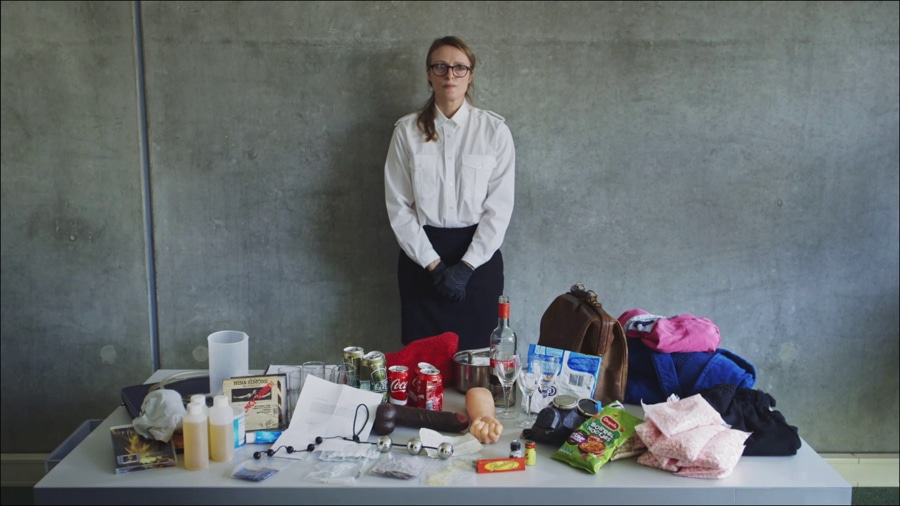 A dramatic reconstruction of the infamous 2007 HIV case in the Dutch city of Groningen where drugged guests were injected with HIV-positive blood during sex parties.

Feast is a first feature for Dutch director Tim Leyendekker who is well known in Holland for his short films. This film essay evocatively explores how three men ended up being convicted of rape and infection of others with HIV. The main perpetrator, Peter M. was a nurse at a care home and after his early release from prison actually returned to nursing eventually being disqualified for good.

Sometimes these men are watched by another group of males behind a glass partition, another cryptic symbolic cypher. The discussion is mainly centred around Sado-masochistic sex, its rituals and meaning. It also sheds some light on how they met Peter – in one case in September 2007 – and how they viewed their participation in these orgies, where everything was allowed, participants eventually losing sight of whom they had sex with. The argument was made that the internet ads for these meetings categorically stated unsafe sex was to be practised. So the fact that Peter and his friend injected their own HIV affected blood into the bodies of others was unlikely to alter the health status of their victims since they were HIV positive at the outset. There are also explicit descriptions of how Peter injected the infected blood.

After another chapter-dividing interlude (usually a silent night-time image of naked man on a park bench, or in the waiting area of a bus stop), we arrive at the main thrust of Feast: an interview with Peter (den Boogard), who lives with his partner Wim in a very bourgeois house in the countryside. Peter is unrepentant, still maintaining he did not deserve to be sent to prison:”The fourteen people who pressed charges, assumed the role of victims. I only did what they asked me to do. I gave people drugs, but they wanted them. Things have happened, they call it rape, but I do not. They have surrendered themselves to me, when they came voluntarily to my house. In retrospect, I find it quiet beautiful, not criminal at all. What happened there was full of love”. Asked how he feels about being HIV positive, Peter answers, “that it is a nice certification. Form of belonging, sort of beautiful.” This certainly raises questions surrounding freedom of the individual along with that of eugenics.

After that, a biologist (Sereti) shares with us the positive effects of infection on tulips, turning them yellow to green. There again eugenics springs to mind, and this theme continues throughout whole feature. The chapter, in which Max tries to convince us of his right to accuse Peter, turns again into a defence of Peter’s action, with Max being accused “of being a victim”. The final section is the most enigmatic: it features a permanently changing scenes of people bathing at a lakeside retreat.

Perplexing, and often very provocative. Is Leyendekker simply a provocateur, convinced of the outrageousness of his position, or is using his role as a filmmaker to cover his position. We shall never know. If Peter or the rest of the group believed their opinions were completely justified then Feast certainly is provocative, and any criticism lays itself open to homophobia. It is up to the audience, to decide to take sides. AS