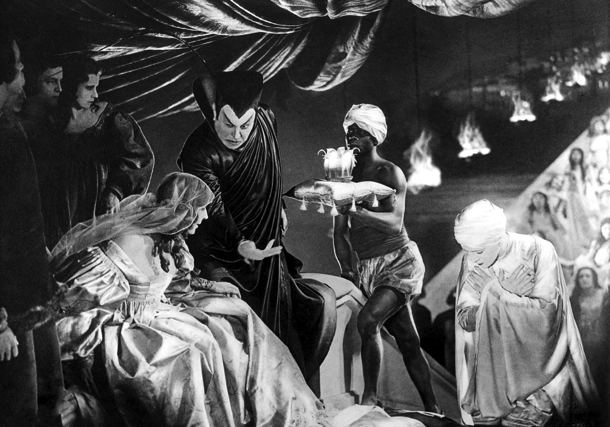 Initially it was Ludwig Berger (The Thief of Baghdad) who was supposed to direct the 2M Reichsmark production (200 M in current currency), but Emil Jannings, who was cast as Mephisto, insisted on F.W. Murnau, the man who made him world famous in the The Last Man two years previously. It would be Murnau’s last German film, before he went to Hollywood, where he would direct Sunrise a year later.

Hans Kyser’s script for the film was based on texts by J.W. Goethe, Christopher Marlowe and an old German folk legend. Faust was already a favourite topic for film makers: Louis Lumière was first in 1896, Georges Melies followed a year later and the first American version of Faust was directed in 1900 by Edwin S. Porter. In Murnau’s version, the conflict is a straightforward fight for supremacy between God (represented by an archangel) and Mephisto (Jannings). Their wager is the first: if Satan could win the soul of one person, he would rule the earth. Mephisto chooses Faust (Ekman), an old alchemist, trying to make gold from metal. He lives in a small town, where a huge cloud turns everything into dark: Mephisto has arrived to punish the citizens with pestilence. Faust is unable to find a cure, and Mephisto seduces him into a bargain: he will grant Faust a cure in return for his soul, the original deal lasting a day. But whilst Faust succeeds at first, the citizens find out about his connection with Satan, and hound him out of town. After being promised eternal youth, wealth and power, Faust kidnaps the Duchess of Parma on her wedding day, and after returning to his home town, he seduces the virgin Gretchen (Horn). After Faust kills Gretchen’s brother, the pregnant woman is accused of being a whore and put to the stocks. Going mad, she mistakes a pile of snow for a cradle, killing her baby child. She is condemned to burn on the stake, but Faust at last sees his guilt, joining her in the flames, though loosing Mephisto’s wager.

In spite of the many aesthetic tricks Murnau used, he was very keen on realism: Horn, for whom Gretchen was her first main part, never stopped telling journalists how close she came to be really consumed by the fire. Dissolves are dominating the film, and dancing letters like in Caligari, help to create a super natural atmosphere. When Mephisto and Faust are flying over world on a carpet, Murnau uses a camera on a roller coaster. Faust’s change from an old to a young man (and vice versa) are impressive, and the riders of the apocalypse are truly frightening even today. Jannings dominates the film, his Mephisto is truly evil, but not in a superficial way – he really seduces Faust. Horn is very aptly cast, and Guilbert is a great Marthe Schwerdtlein. We also re-encounter the German expressionist design and architectural flourishes of Caligari with its spiky gables and narrow alleyways – unsurprisingly, since Walter Röhrig was again in charge of the design. A new harp score by Stan Ambrose (there is also an orchestral option) underlines the phantastic atmosphere, transcending images and words into a glorious poetic realism. This is an absolutely enchanting visual experience.   AS

AVAILABLE AT MASTERS OF CINEMA FROM 18TH AUGUST 2014

40-PAGE BOOKLET WITH A ESSAY BY PETER SPOONER, WRITING ON THE FILM BY ERIC ROHMER, AND RARE ARCHIVAL IMAGERY.