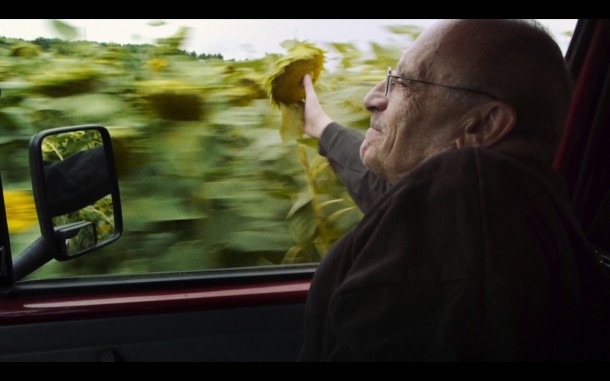 This journey of a father and his son – both documentary filmmakers – from Warsaw to Paris is a trip into the past and a search for identities. Father Marcel was born in Paris in 1940, his mother was in the French Resistance, and he lived in different children homes, always frightened to lose his mother, even (or particularly) when she was visiting him. His son Pawel was born 25 years later in Warsaw. We see footage from Marcel’s Super 8 camera, showing the young Pawel growing up at home with his parents. But when Pawel was 17, his father left his mother Tamara for another woman, Ania: this trauma is still unresolved for Pawel, and during the journey he tries stubbornly to make his father own up to some moral responsibility for the divorce, particularly since he accuses him of having made him buy the wedding rings for the new couple – an accusation the father strongly denies.

The two travel in a camper van, stopping at camping sites along the route via the Czech Republic (which Marcel still calls Czechoslovakia) and Austria (“they still love order and organisation”), before arriving in Paris, where Marcel had buried the ashes of his mother in a public park in 1964. Two generations clash: Marcel still trying to find his identity, finally settling for Jewish, with Polish and French being relegated to the ranks. He too is still a believer in causes (which he needs, like most of his generation), whilst his son is happy just to care for his family, he accuses his father of being enthralled by the communist system, which turned out to be inhuman, even though “you thought it was fantastic”. Pawel further accuses his father of being a control freak, who has an opinion on everything and interferes with everyone. But, contradicting himself, he admits that his education of his daughters is much more conventional and hierarchic, than his father’s: Marcel treated little Pawel like an equal, not like a son – a fact, which Pawel turns against him “You wanted a little mini-me”.

Somehow a pattern develops: father and son wanted for their children an upbringing neither ending up having. Marcel grew up with parents who were looking very much for stability in their life, “happy not having to live in hiding any more”, whilst Marcel saw his son more as an object of an experiment – who himself in turn, wanted for his family nothing more than ‘normality’. In the end, in spite of unresolved issues, we get a sort of happy-end: father and son cuddling in the grass, the same way they did in Pawel’s childhood.

FATHER AND SON ON A JOURNEY is a very intimate document, the two of them living in a very cramped space, holding the camera alternatively. They stop mostly in the countryside, where they seem to feel free to express their feelings. But the dominant feature is their dialogue and their struggle for dominance: more than once, one of them leaves the scene sulking.  Somehow we end up with the feeling that Marcel’s concept of having a “partner, not a son” has been successful, the two behave very much like a couple – though it would be interesting to see Pawel’s take of this journey: his version (a mere 54 min), edited from the same material as his father’s film is called “Father and Son”. AS