Every now and again comes a really eye-opening documentary and one that changes your mind about our impact on the world we live in.

And Fashion Reimagined is one of those films. Not a particularly interest-sparking title, so you may flip over it, particularly if fashion is not your thing. Becky Hutner, who directed and produced it, raises the profile of one of the most wasteful and polluting industries today: that of fashion.

Fresh-faced designer Amy Powney is the rising star in the London fashion scene and the woman who has pioneered a sustainable way forward with her cult label Mother of Pearl . English country girl Amy grew up with a passion for drawing and soon discovered the devastating environmental impact of her industry on the globe. On winning the coveted Vogue award for the Best Young Designer of the Year (2017), which comes with a big cash prize, she decided to put the money towards creating a sustainable collection from field to finished garment, and in doing so transform her entire business.

The film follows her often tortuous progress in pioneering a way forward. But her personal revolution soon led to a ground-breaking societal change. The collection made its premiere at London Fashion Week in 2018 under the name “No Frills.” The mission was to make No Frills an organic, traceable line of clothing that uses minimal water and chemicals, is socially responsible, and considers animal welfare, particularly the painful process of ‘mulesing’ where sheep are mutilated to prevent infection, just for the benefit of the wool trade. 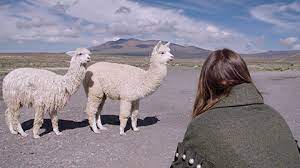 You may never think twice about buying fast fashion on the Highstreet or online – perhaps a few summer outfits from Zara or teeshirts and jeans from Uniqlo or The Gap. What could be simpler? Yet the garment trade has one of the most destructive carbon imprints with its wasteful use of water and poisoning toxic chemicals. And not to mention the mountains of used clothes that end up in landfill clogging our landscape even further.

Amy’s journey to source wool and cotton from ‘ethical’ was not easy. With her business partner Chloe, she travelled to Pedro Otegui’s family farm in Uruguay, known for its impeccable animal welfare and traceable products to the origin, and to Isko: a denim mill in Turkey certified by the Global Organic Textile Standards (GOTS). Denim is one of the pernicious products in its use of water and chemicals. And this segment is arguably the most revealing a part of the documentary and also adds an interesting travelogue spin.

Amy soon realised she had a lot to learn about how the garment industry operates: it’s not just about sourcing, carding and spinning from one location: the raw material travels thousands of miles from start to finish, once again taking its toll on the planet, not to mention the plants and animals involved. English wool is not as soft – nor as white – as that sourced in Uruguay, for example, and this gives the film its educational slant, not to mention some magnificent scenery and some dramatic tension in the process.

Eventually Amy pulls through with a fabulous collection, and plaudits from fashion luminaries such as Katharine Hamnett, the UK’s first sustainable designer, who provides an opportunity to talk about the reinvention of the fashion industry during London Fashion Week, providing a hopeful trigger for change in the industry and some real interest from buyers around the world. With her label Mother of Pearl, Amy has pathed a way forward for a kinder industry and less waste and agony for animals and the environment. So time to think twice when we next head to the High Street for that shirt that may be chucked away after a year to make space for yet another new set of clothes for this season. MT