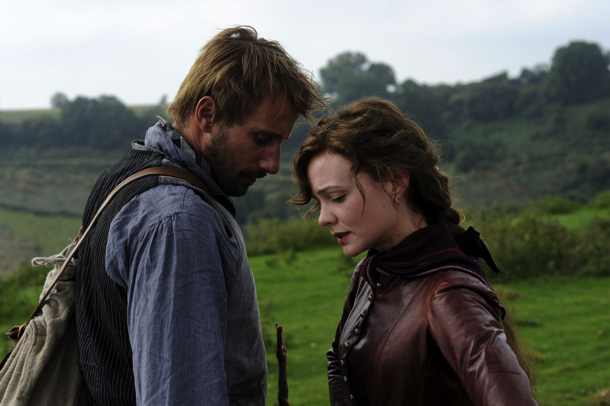 John Schlesinger’s 1967 film of Hardy’s novel, FAR FROM THE MADDING CROWD, was always going to be a hard act to follow. Nearly 50 years later. Thomas Vinterberg’s version of the tale of Bathsheba Everdene a “headstrong country girl” and her three suitors, has a distinctly European flavour. A Danish director and DoP;  an English screenwriter (David Nicholls); a Belgian Gabriel Oak (Matthias Schoenaerts) and the occasional Welsh twang of Michael Sheen’s Mr Boldwood make up this neatly potted version, running at 40 minutes shorter than the original 1960s version.

Vinterberg’s focus here is on the intimacy between the central characters: particularly between Carey Mulligan who exudes a serene calm as Bathsheba. Her relationship with Gabriel – that starts as a proposal in the middle of a field – simmers away in the background as the two play a subtle and convincing game of interdependency that adds a sexual frisson to their working friendship  – Oak is the only man who makes Bethesda smile broadly and shed a tear. After the reversal of fortune brought about by the loss of his sheep, he may have less to offer financially when she inherits her Uncle’s farm, but throughout he is his own man, and a good man at that, and not afraid to walk away – and that Hardy’s clincher at the end of the day. Schoenaerts evokes a powerful masculinity that is both physical and emotional, but he also a brings reliability – for as long as Bathsheba needs him –  making it clear that he will one day walk away. Oaks not only becomes a confidante to Bathsheba but also to Boldwood, a middle-aged landowner whose senses are inflamed on receiving her casual Valentine with its throw-away message. But what Michael Sheen lacks the regal detachment of Peter Finch’s Boldwood, he makes up for in with the desperate, gnawing vulnerability he brings to the role; the only one of the trio who has as much to lose as to gain, as the eldest, if he fails to win Bathsheba’s hand. Sheen’s poignantly-tortured agony as he questions his chances, is one of the triumphs of the film.

But Vinterberg’s version has much less of the duplicitous chancer, Sergeant Troy (Tom Sturridge). In an underwritten role, that fails to conjure up his importance as the most manipulative and controlling of Bathsheba’s consorts, Sturridge is no match for the dashing blue-eyed charm or erotism of Terence Stamp –  for one, he looks positively wet behind the ears (despite being exactly the same age as Stamp in the role – 29); for another, he emerges as even more the cad and less as the skilful seducer than Stamp did back in the sixties.

At the heart of Winterberg’s film is the subtle, slow-burn relationship between Mulligan’s Bathsheba and Schoenaerts’ Oak; which develops through the ups and downs of their farming challenges. The smouldering Schoenaerts has a difficult role as he is forced into underplaying his character, relying on a potent chemistry to attract Bathsheba. Carey Mulligan is elegantly attractive, her ladylike daintiness tempered by a shrewd sense-of-self and a maturity beyond her years; as against Julie Christie’s more ethereal light-hearted girliness.

What Vinterberg’s film lacks is Hardy’s (and Schlesinger’s) potent essence of 19th Dorset life – the vagaries of farming and animal husbandry and the way they drive the narrative forward, shaping the lives of this ‘madding crowd’ of rural countryfolk. MT