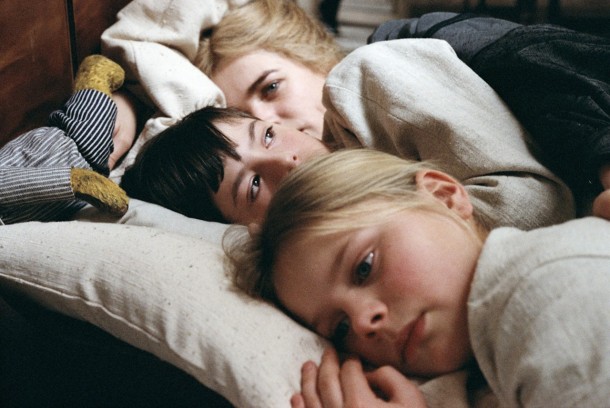 Fanny and Alexander was supposed to be the swansong of Ingmar Bergman (1918-2007), but he went on to direct many more TV films, like Saraband (2003), often with his favourite screen actors Liv Ulmann and Erland Josephson. FANNY AND ALEXANDER was one of his most optimistic features, even though the dark epilogue takes some of the positivism away.

Set between 1907 and 1910 in Uppsala, a Swedish city famous for its university, it tells the story of two siblings Fanny (Allwin) and Alexander (Guve), whose father Oscar (Edwall) dies suddenly of a stroke. Their mother Emilie (Frölling), soon remarries the bishop of the city, Edward Vegerus (Malsmsjö), who turns out be an autocratic, joyless tyrant. The children and their mother were used to a carefree, artistic lifestyle, and do not want to adjust to the cold hearted stepfather, who in particular punishes Alexander, for his ability to see “invisible friends”. When Emilie decides to leave with her children, Edward threatens that she will loose them, since he will not agree to a divorce. But a friend of her former mother-in-law, smuggles the children out of Vegerus’ house, while he is sedated with a bromide drink. She tells Edward, that she intends to leave him, but he makes it known that he will go on ruining their lives. Vegerus’ dying aunt, who lives in his house, sets her hair and bedclothes on fire with a gas lamp, and runs to Edward’s bedroom, setting him on fire. In spite of his sedation, he manages to save his aunt, but dies soon afterwards. In an epilogue, the family is again living their former, sunny and lighthearted way, when Alexander sees Vegerus in his dream, And is told “you will never be free of me”.

Whilst the sprawling saga is one of Bergman’s more traditional outings, DoP Sven Nykvist conjures up a romantic atmosphere of a bygone era, which overwhelms the audience with its sumptuous visual aesthetic. The contrast between the dark, mausoleum-like atmosphere in Vegerus’ house, is set against the playful, lightly and softly lit scenes bookending the dreadful insulation where the three have suffer. The cast, particularly the children,  are brilliant and Bergman directs with his usual thoughtful sensitivity. AS