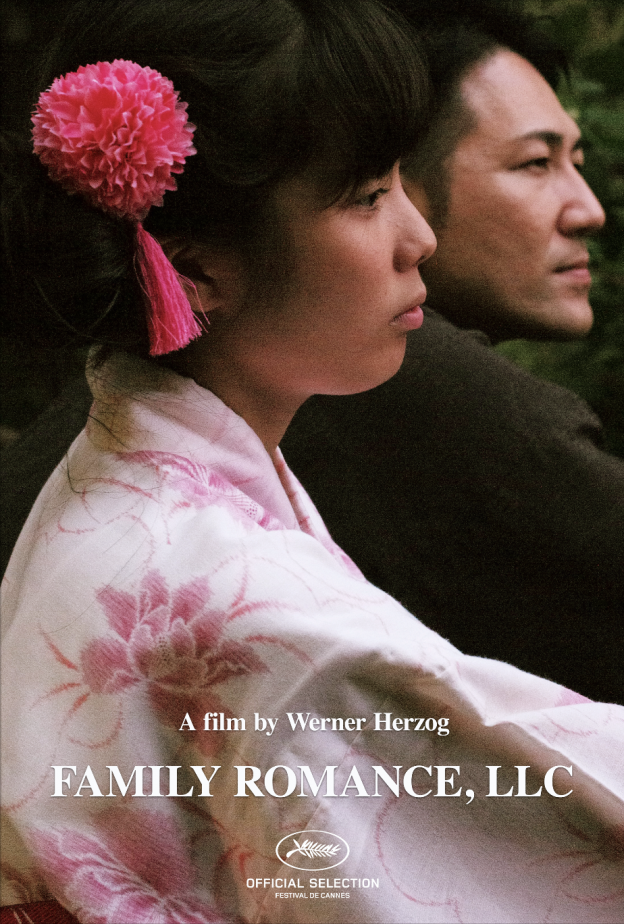 Werner Herzog is experimenting again and this latest feature gamely blends drama with a hybridised fiction and documentary. Based on Japanese company that hires out its founder to act as a stand-in to suit client circumstances is not particularly original, although a tongue in cheek humour shines through in some of the cameos. Yorgos Lanthimos did this much better in Alps (2011). Here Herzog somehow falls victim to his narrative’s ambiguity: We’re never sure whether this is social critique, or a hidden camera gag.

Yuchi Ishii is boss and main employee of his Family Romance LLF (Limited Liability Company). His first assignment is at Cherry Blossom time in Tokyo’s Yoyogi Park where he is meeting twelve-year old Mahiro Tamimoto: hired by the girl’s mother, his remit is to impersonate her father. The Dad in question pushed off when Mahiro was very young, and her mother Miki Fujimaki needs Yuchi to replace him, on important occasions. But this is just one of Yuchi many gigs: a young celebrity-hungry actor then hires him with a posse of fake photographers to get her face into the newspapers; an elderly woman, who has won 180 000 Yen in the lottery, has wants him to create that same feeling of elation when she found out about her win. Yuchi is also hired by a railway employee to take a bollocking from his boss over the late running of a train – the humour here lies in the perceived loss of face for the worker. But when Mahiro arrives one day with an Afro-American toddler “who no one wants to hang out with” because of her “fire-burned face”, things becomes distinctly weird. And when Mahiro falls for ‘father’ Yuchi, her mother tries to have the him move in.

Herzog tries to be philosophical throughout this often awkward, often amusing oddity, but the episodes are simply too thin to invite deep reflection. When Yuchi visits a hotel run by AI service personnel (robots), we are reminded of Philip K. Dick, but the director immediately jumps to another of his numerous exploits. Herzog’s basic camerawork contributes to making this feel like a very minor work, along with Ernst Reijseger’s saccharine score. AS