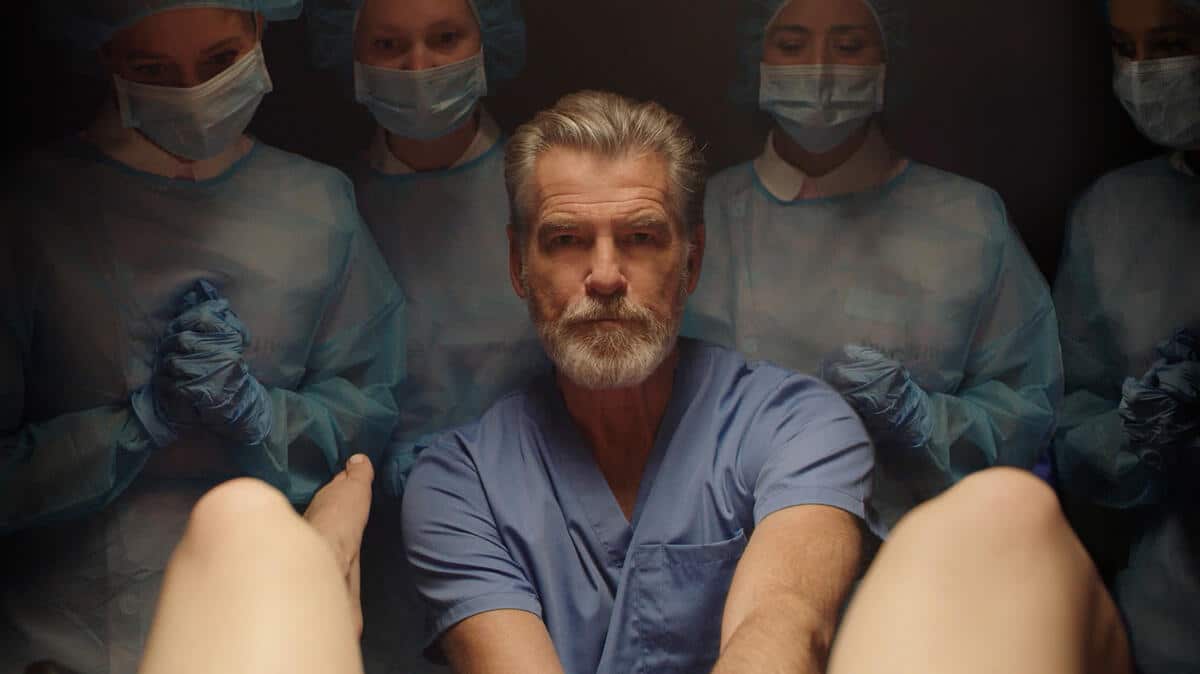 Ilana Glazer co-wrote the script for False Positive in which she also stars as Lucy, a desperate New Yorker trying to get pregnant with her husband Adrian (Theroux). But this is no ordinary fertility drama – there are quirky bits like the scene where Adrian jacks off to an extreme bondage video to provide the sperm for the procedure – and so we’re not surprised when events turn more sinister as the psychological thriller unfolds with its feint echoes of Rosemary’s Baby, naturally minus Polanski’s iconic allure.

A pompous Pierce Brosnan (channelling Vincent Price) is the archetypal maverick fertility expert (and cosmetic surgeon) Dr Hindle who treats Lucy in his new age clinic where he has masterminded an enigmatic ground-breaking technique. After jumping the queue thanks to Adrian’s medical connections with the good doctor, all goes according to plan and soon Lucy is pregnant with – not one – but three potential babies: twin boys and a singleton girl. But something’s not right. And there’s not room for the three foetuses to develop, so amidst growing paranoia and a need for ‘selective reduction’ Lucy and Adrian must a harrowing decision to abort either the two boys or the girl. And they decide to keep the girl naming her ‘Wendy’ in line with the film’s burgeoning ‘Peter Pan’ motif.

Midsommer and Hereditory DoP Pawel Pogorzelski creates some sinuous visuals which add to a sinister soundscape pulsing away in the background (including a dulcet performance from Marcia Henderson of “Who Am I” from the 1950 Broadway musical Peter Pan). False Positive makes for a chilling addition to the small but perfectly formed fertility horror genre which relies on women’s natural fears and anxieties surrounding safe pregnancy and birth to drive the story forward sending it soaring into stratospheric realms of terror.

To add grist to the fearful misogynist maelstrom, derogatory phrases such as “mummy brain” are frequently bandied about in a patriarchal culture that still seems to persist in today’s medical establishment. Lee interweaves photos from the archives showing the gruesome possibilities when childbirth goes wrong, but this feels tonally out of kilter with the otherwise slick drama unfolding that even hints at artificial selection.

Meanwhile, Lucy is desperately trying to keep her job as a marketing consultant on track. Late in the day she decides to change her ‘birthplan’ after bizarre developments with Dr Hindle cause her to seek out a new midwife, the mysterious Grace Singleton (Zainab Jha).

Convincing performances from the central trio are what makes this compelling, based on an original story by John Lee and Alissa Nutting. This is a stealthy psychological thriller that keeps us glued to the screen despite some awkward elements showing that when the chips are down women can trust no one – least of all other women. That all said, the conclusion is definitely positive. MT