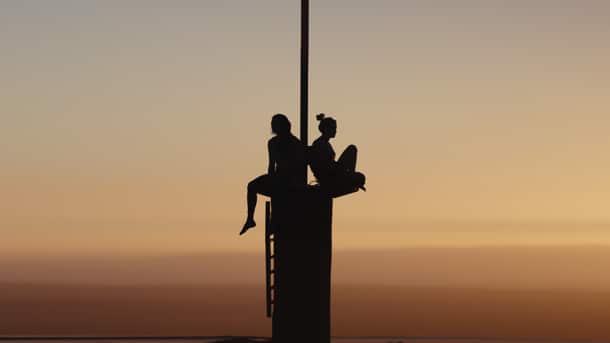 British director Scott Mann Takes a shoe string budget and turns it into one of the best action thrillers of the summer with ‘a feel the fear and do it anyway’ premise.

Totally far-fetched and ludicrous it may be but certainly effectlve (and aimed at the GenZ generation) it all starts with accident when experienced climber Dan (Mason Gooding) falls to his death from a vertiginous mountain face leaving his wife Becky (Grace Fulton) and her and best friend Hunter (Virginia Gardner) stranded thousands of feet above ground level, and then left to cope with his tragic loss.

Becky is still drowning her sorrows a year later when Hunter, now a unfeasibly fearless extreme sports fanatic with a massive online following, suggests they scatter Dan’s ashes in style, rather than moping around mourning his death. But what Hunter actually has in mind actually beggars belief: the two will climb 2,000 feet to the top of a rusty old pylon support – the same height as the Eiffel Tower – for the ceremony, it’s the stuff of nightmares.

Mann and his DoP MacGregor and team make terrific use of cutting edge visual effects to make us believe the girls are really up there in the skies where its searingly hot and scorching) but what’s beyond belief and most impressive is their clear-eyed vision and steely resolve to survive once things start to go wrong. Admittedly Becky is hard-nosed and cruel as we’ve already discovered in an earlier scene where she leaves a coyote to be eaten alive by vultures, relaying the spectacle to her followers, she also admits to feeling hungry when the smell of a BBQ drifts up to the skimpy metal platform they are standing on (surely the last thing on your mind on the brink of death). With its simple but effective plot-line Fall is a buddy survival movie that never outstays its welcome in delivering watchable, stylishly artful thrills – in contrast to the summer’s overblown blockbusters such as Nope and Bullet Train.

Fall is out in the UK on 2 September