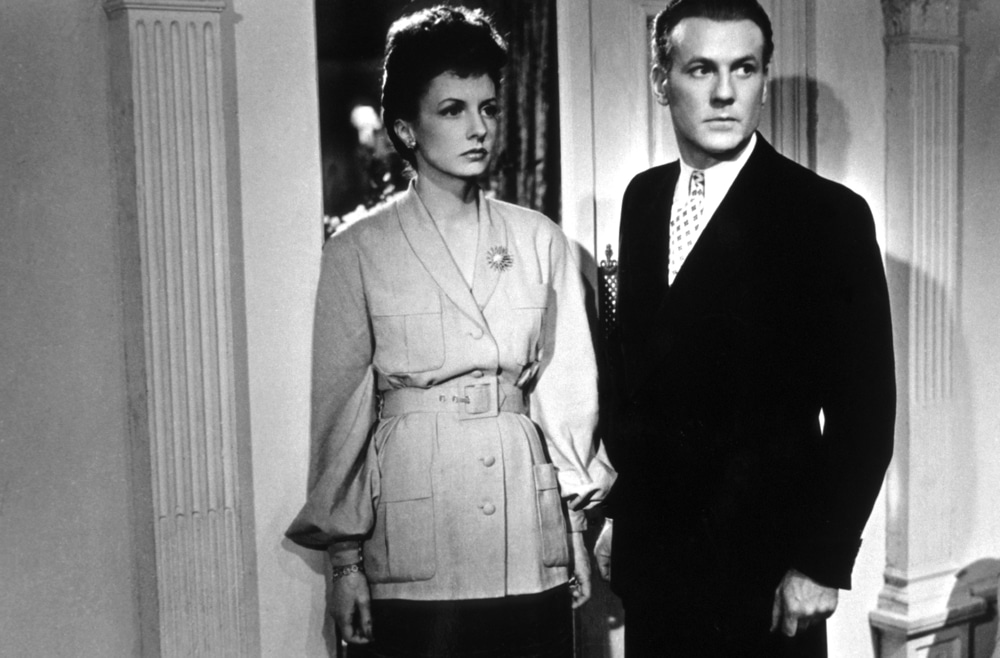 Jacques Becker only completed thirteen feature films but still enjoys a near mythical reputation. Nouvelle Vague directors like Godard and Truffaut wrote enthusiastically about his dramas Goupi Mains Rouges and Le Trou in ‘Cahiers’, vaunting his work as far superior to the traditional French cinema offerings they often lambasted.

Becker started his film career as assistant to Jean Renoir, (Toni, Partie de Campagne), before finding his own style mainly in dark crime features mining his experiences in the Resistance in the South of France. He began shooting FALBALAS (‘Furbelow’ or trimming for a woman’s petticoat) in 1944 after the Liberation, but the release had to be postponed well into 1945.

Nineteen-year old Micheline Lafourie (Presle) has come from Reims to Paris to marry the much older business man Daniel Rousseau (Chevier). Whilst living with her ten (!) cousins in a Paris mansion, she meets couturier Philippe Clarence (Rouleau), a good friend of Daniel. Philippe is a womaniser, but worse, treats his nearly all female staff abominably. The mature fashion house manager Solange (Dorziat) is the only one who stands up to her boss, treating him like a little boy – a nasty one, at that. Not so lucky is Clarence’s ex, Anne-Marie (Lugagne), who is still in love with Philippe, even though he treats her like a doormat. Philippe is captivated by Micheline and seduces her – promising to elope with her. A few days later, he has changed his mind, encouraging Micheline to marry Daniel as planned. Micheline, scorned but determined not to let it show, decides to return to Reims alone. And her nonchalance towards Philippe makes him think again: he is once again infatuated and claiming to be in love for the first time. Daniel finds out about the affair, but it is too late. Micheline has made up her mind to teach Philippe a lesson on the launch of his new collection. The dramatic ending is one of the finest piece of noir cinema – the fashion world overall pictured as glamorous but shallow and empty. Falbalas plays out in the style of the sub-genre, so appealing with its ravishing sets and elegance it later convinced Jean Paul Gautier to become a couturier.

Rouleau is in his element as the suave and soulless perfectionist: a misogynist par excellence. DoP Nicolas Hayer (Orphee) conjures up immaculate black and white images of Philippe’s domaine: the physical and psychological exploitation in stark contrast to the beauty of the garments and the soigné clientele. Editor Marguerite Renoir (who took Renoir’s name even though they were not married) keeps up a breath-taking tempo, much more suited to a thriller than a graceful fashion feature. But the ending is one of the greatest achievements of post-war French cinema. AS