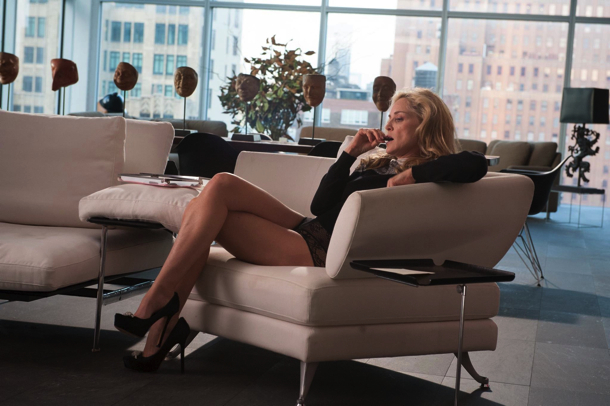 After his excursion into musical films (Romance and Cigarettes and Passione), the director Turturro has returned to the theme of his debut film Mac (1992): the human male torn between lust and ideal, laziness and honest self respect. Murray (Allen) and Fioravante (Turturro) are nearly down and out: the much older Murray has just lost his second-hand bookshop, and Fioravante, a shy dreamer, is even worst off: he only works two days in a florist shop and has to borrow his rent money from Murray. After a visit to his dermatologist, the attractive Dr. Parker (Stone), Murray comes up with a solution: he will pimp Fioravante – for a hefty “agents” fee – to Dr. Parker, who wants to have a stud for a threesome with her equally stunning girl friend Selima (Vergara). Fioravante is not too eager, but the bills accumulate, and he gives into the Faustian bargain offered by his “friend”. Murray is much more eager than his younger friend, he finds another “client” for him: Avigal, a widow of a Chasidic Rabbi, who has been kept away from the outside world for twenty years by the strict laws of her religion. Fioravante, himself a non-observant Jew like Murray, falls in love with the shy mother of six, – in spite, or rather because of their relationship being rather chaste – but the Jewish vigilante Dovi (Schreiber), who himself is in love with Avigal, follows Murray and Avigal, suspecting “indecencies”. He finally kidnaps Murray with his fellow-vigilantes to get to the bottom of things. Meanwhile, Fioravante fails miserably in his task to satisfy Dr. Parker and Selima, who guess immediately that he is love…..

It is quiet clear from the beginning, which choices Murray makes: he is an old, sleazy, mean and totally corrupt man, whose greed for easy money is only superseded by his hypocrisy. Fioravante on the other hand, wants to do right, but he is too weak and malleable – the perfect victim for Murray’s scheming. Parker and Selima are at least honest in their quest for lust, whilst Avigal takes her time to develop a sense for right and wrong – no wonder after twenty years of “imprisonment”. Dovi is the self-appointed leader of an ultra-orthodox Jewish neighbourhood watch, a sort of misogynist mind police. Cruising along in his car all day, he is as lazy and hypocritical as Murray, the irony being that the kidnapper and his victim are the different side of the same coin. When Dovi asks Fioravante towards the end of the film “are you really a Jew?” the latter answers “I don’t know”. Because labels of identity have lost their meaning: there is no common ground between Dovi and Fioravante – apart from the fact that they love the same woman.

Turturro gently unmasks his characters, never judgemental, but painting a rather sad picture of human nature – apart from Avigal, everybody seems to have become a consumer, be it money, emotions or ideals. The camera elegises New York, the panorama shots are wistful, sometimes doleful, the tracking shots keep everybody distanced, there are few close ups: intimacy has ben lost. Allen’s viciousness is near psychotic; Turturro is mournful, with a permanent low-level depression; Stone and Vergara are slightly over the top in their total abandonment, with Paradis’ Avigal full of dignity, bravery and restraint – an outsider in this world of total sell out. AS