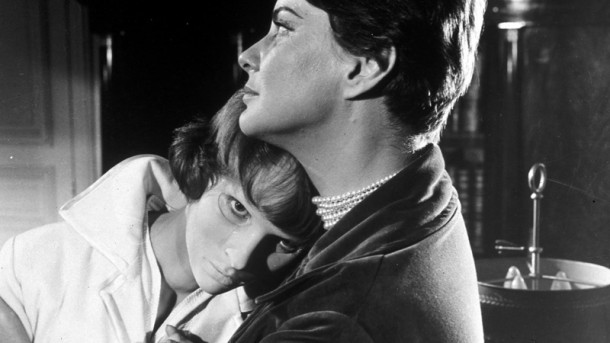 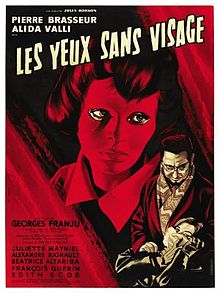 In 1960, George Franju’s Eyes Without a Face was in a pretty bad shape. It was ludicrously re-titled The Horror Chamber of Dr Faustas, suffered a crass censor cut and was badly dubbed into American English. For a film that deals with a surgeon’s attempts to transplant a new face onto his disfigured daughter, the film’s mutilations appeared ironic, way back then. Thankfully in the 1970’s the film was re-evaluated and restored intact.

Eyes Without a Face is roughly contemporary with Hitchcock’s Psycho (1960) and Powell’s Peeping Tom (1959). All three films have huge images of anxious eyes and nervous looking faces. Such depiction of threatened and threatening visages pushed the mid-20th century horror film into a dark psychological realm still felt today.

Only on a surface level is Franju’s feature a horror film. Our mad scientist (a surgeon, Dr.Genessier, played by Pierre Brasseur) is killing young women for his facial surgery experiments. This is executed out of ambition, guilt and love for his daughter Christiane (Edith Scob) injured in a road accident caused by her father’s erratic driving. Christiane wears a mask that radiates a Jean Cocteau-like expression. The surgeon is assisted by his female secretary Louise (Alida Valli) who faintly echoes Baron Frankenstein’s assistant Igor. Whilst Dr. Brasseur’s theory of a transformative surgery (delivered to an audience of rich, enthusiastic elderly women) reminds you of those Boris Karloff, as crazy scientist, moments when a ‘great’ vision for mankind is triumphantly announced.

Yet of all horror films, it cannot be reduced to its generic elements. For it is not quite a horror film, not quite a fantasy, not quite a fairy tale, not quite a crime movie, not quite science fiction, nor a parable or a feminist fiction. Franju’s sure and sensitive direction makes it walk its own unique road conveying an atmosphere of mystery and ambiguity. Its very French and very existential creepiness contains ideas of identity, responsibility, notions of what attract and repels the self, and the terrible loneliness of being a non-person without a human face (literally and spiritually) in the world.

Perhaps the film’s most chilling scene is not quite a documentary moment. A series of still photographs with a detached voice over, record the failure of an operation on Christiane. The implanted face in the superimposed photographs is shown to be gradually cracking and breaking up to reveal signs of the shattered mess underneath. It makes you think of tyrannical control, tampering with nature and the horrible work of the Nazi doctors. Yet, let’s not forget further Gallic frissons. A brilliant, nervy barrel-organ score from Maurice Jarre, Eugen Schufftan’s ominous photography, the haunting performances of the leads, the film’s audacious use of dogs and birds, and Franju’s assured filmmaking (few directors can make a car-ride scene feel so frightening).

The BFI Blu-Ray edition (containing extra shorts and a documentary) is the best print I’ve ever seen of a masterwork that’s both acutely painful yet tenderly poetic. Alan Price