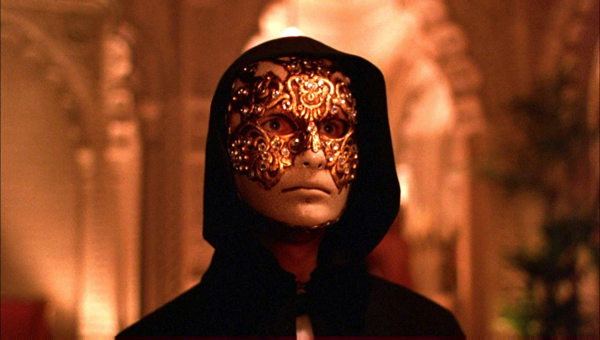 Stanley Kubrick’s last film is ironically his biggest disappointment. Eyes Wide Shut  looks very alluring and the starry cast is impressive, but the story just doesn’t lead you where you hope it will: it doesn’t lead you anywhere for that matter – unless of course you’re want to be transported to a surreal dreamworld of ludicrous nightmares where the doom-laden sensuality is more important than the message it actually delivers. The  last act of this Gothic Manhattan thriller is completely out of context with what has gone before.

Ironically, this fantasty thriller is built around two cypher-like central characters who are merely there to serve the premise that marriage s first and foremost a flimsy affair built on fidelity. And any transgression from either side leads to the relationship imploding rather than being strengthened by its changed dynamic. If you lop a branch of a tree, it usually doesn’t die, it just grows in a different direction, and can even flourish from a little light pruning – and this what could have happened if we buy into the story that Kubrick tells, based on Arthur Schnitzler’s original Viennese novel Traumnovelle (he also wrote La Ronde).

We first meet Dr Bill Harford (Cruise) and his glib wife Alice (a sizzling Nicole Kidman)  dressing seductively for a cocktail party given by an illustrious patient of the good doctor, Victor Zegler (Pollack). They are very sure of themselves and their marriage to each other as parents of a 7 year old daughter. Being 1990s America, marital infidelity is still treated very seriously and the scantily clad couple spend a few minutes smoking a joint and fondling one another in bed, while projecting their sexual fantasies onto each other: Alice is very outspoken in her belief that woman are just as sexually promiscuous as men, given the opportunity. And what she says is convincing: that once a person has set eyes the object of their desire, they will do absolutely anything to consummate that urge, even if it involves cheating on their existing partner, who ironically attains a status of enhanced endearment and affection in their hearts – while their brain is almost locked in an atavistic need to mate. whatever the cost.

Thus Kubrick sets the stage for all kinds of possibilities to play out in the rest of the film having set the seed of doubt in the doctor’s mind, but not in that of his wife, who clearly trusts him and appears gung-ho at the cocktail party, flirting outrageously with her dance partner (Sky du Mont) while Bill shoots the breeze with a couple of floozies. In fact, Kidman plays Alice in same cocky and mannered way reminding us of very much of Nicholson’s Jack Torrance in The Shining.

Eyes Wide Shut certainly showcases Kubrick’s mastery as a filmmaker. His daughter Anya said it was his favourite film and it positively glows with the rich and sensuous warmth of New York in the holiday season, both in the shimmering streets and the vibrant interiors. But a weird nagging doubt hangs over proceedings. And this doubt eats into the Doctor, unleashing all kinds ideas about his wife Alice who he imagines being seduced by the man in her fantasy projection. Dr Bill even succumbs to the charms of a passing prostitute but is saved from actually going through with the idea when a call from Alice stops him in his tracks..And as the evening develops an almost pervy desire creeps over Dr Bill when he meets an old school friend who talks about a late-night gig in an upmarket porno club. Fuelled by Alice’s revelations he is seized by the desire to join his friend in sampling this evening of erotica.

But although neither of them end up “being banged to death” at all – the finale sees a couple of rather disillusioned urban bores, weeping over something that never happened – for want of something they truly would have liked to have taken place – and Alice’s tears are therefore tears of sexual frustration rather than hurt. And even if it had happened, Alice’s character at the beginning of the film would surely be able to get over the fact that her husband watched a fit few women being fucked, doggy style. So Eyes Wide Shut is not about infidelity, but suspicion and jealousy and marital frustration. About a man who is tempted but prevented from cheating.  About being a woman in a frustrating middle class marriage where she has to do the right thing, rather than the thing she really wants to do. About the mind’s ability to wander and create illusion. – and that’s an even more exciting thing that is briefly explored here at the orgy, if only the ending embellished those fantasies and lead to more satisfying finale for both of them.

Eyes Wide Shut is actually very faithful to the original page. When Dr Jim is jostled in the street it is because he is suspected of being gay rather than a nice Jewish boy, as in the original novel. But Kubrick hits at a loss of masculinity on the part of Dr Jim – that by failing to satisfy his wife completely in bed, he has somehow failed in his marriage, despite the trappings of success that clearly surround the couple.

It often feels like Kubrick’s opportunity to deliberately make a porn film with beautiful women and (once again) full clothed men. You get the impression that once again he is laughing at us from beyond the grave, as we attempt to elevate the film’s narrative into something way more lofty and philosophical. That said, his attention to detail is again awe-inspiring: Larry Smith’s lighting is sublime, and Jocelyn Pook’s score is particularly affective in achieving a similar brooding quality as did Wendy Carlos and Rachel Elkind in The Shining. And although Nicole Kidman does her stuff with consummate ease, Tom Cruise feels a little out of his depth as an attractive young and naive Jewish doctor in thrall to Sydney Pollack’s raddled Jewish industrialist who uses prostitutes to spike his ailing libido.

The only thing you take away from this last work is the hallucinatory forbidden black mass in the depths of the forest. Fantastic, mind-blowing sex is the holy grail of mankind. The only thing that elevates us above the beasts around us. Few find it, and get to enjoy it; most are tempted and left frustrated and even castigated – as was Dr Bill. Possibly is was what Kubrick was alluding to – but sadly he only partly succeeded in making it feel convincing. MT